Bulldog did not attempt to solve the crisis that he made decade ago, Iwan 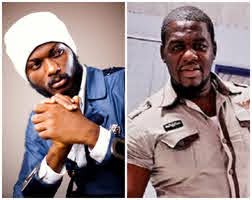 Iwan, a Ghanaian reggae/dancehall singer, has suggested that Bulldog, his former manager, is not sorry for destroying his flourishing music career decade ago.

On Thursday, 19 November 2020, Iwan informed Docta Kay on Accra100.5FM's Nkran Kwanso that although the manager of Bullhaus Entertainment, who now prefers to be known as Bullgod, sorry for everything that happened, he did not show any regret or attempt to make adjustments.

We're humans, so you have to forgive if someone wrongs you and says sorry. Everyone is aware of the events. Everyone is aware of what is in the public domain. He believes like he has done no wrong and has little to give in order to try to fix something that has been destroyed, so you can assess him by the status of his thinking.

"So if someone accuses you of destroying something and takes responsibility about all this and shows that he is genuinely sorry, while he can do something to push that thing to wherever he is, he can't always be there looking at that thing in its spoiled state," Iwan said.

The 'Who's Evil' hitmaker, Born Abdul Razak Issahaku, also charged Bulldog, known as Lawrence Nana Asiamah Hanson in reality, of "battle his image" and presenting his insignificance in the music business.

"And one thing, I don't expect anything from him after ten miles down the line, all he's been doing is combating my name, trying everything he can to make other people see my insignificance...

"He's done a lot, you know, but after 10 years, I've got nine albums and people testified," he said.

Iwan, furthermore, revealed that in the middle of all the uncertainty and purpose to harm his reputation, his secret weapon was his uniqueness, which according to him, made him exceptional.

"You can't replicate me. I'm a very best piece, and I don't think anyone will do what I do.

"They've tried a lot in the past. Not just with the artist you just described [Shatta Wale], there've been a lot of talented people who have gone through his hands [Bullgod]. If you look at the way they're presented, the way they look at the stage, and often they make them do songs like me. And it wasn't working. They were given a lot of awards to look at... It wasn't working," Iwan stated.

He went on to say, "When anyone is original, the person is indeed. If someone brings anything to the industry, the person has introduced it.

"It's up to folks to understand it. If they don't like that it just doesn't mean it's going to be narrow. There are those who would enjoy it and push it to the next phase."

Iwan, born Abdul Razak Issahaku, was one of the country's most talked-about musical celebrities in 2010.

Managed at that time by Bullhaus Entertainment, the 'Lyrical Gunshot' whored out hit songs like 'Thanks and Praise,' 'Jah,' 'Who's Evil' and 'Confidence in the Lord' among others.

Iwan, after a hiatus on the music scene, was re - branded as Iwan Suhuyini.

He released a 27-track album named 'The Return' to mark his coming back in 2020.

'The Return' is his ninth album in the studio.

Content created and supplied by: snowboi1994 (via Opera News )