Best movies released in May over the years. 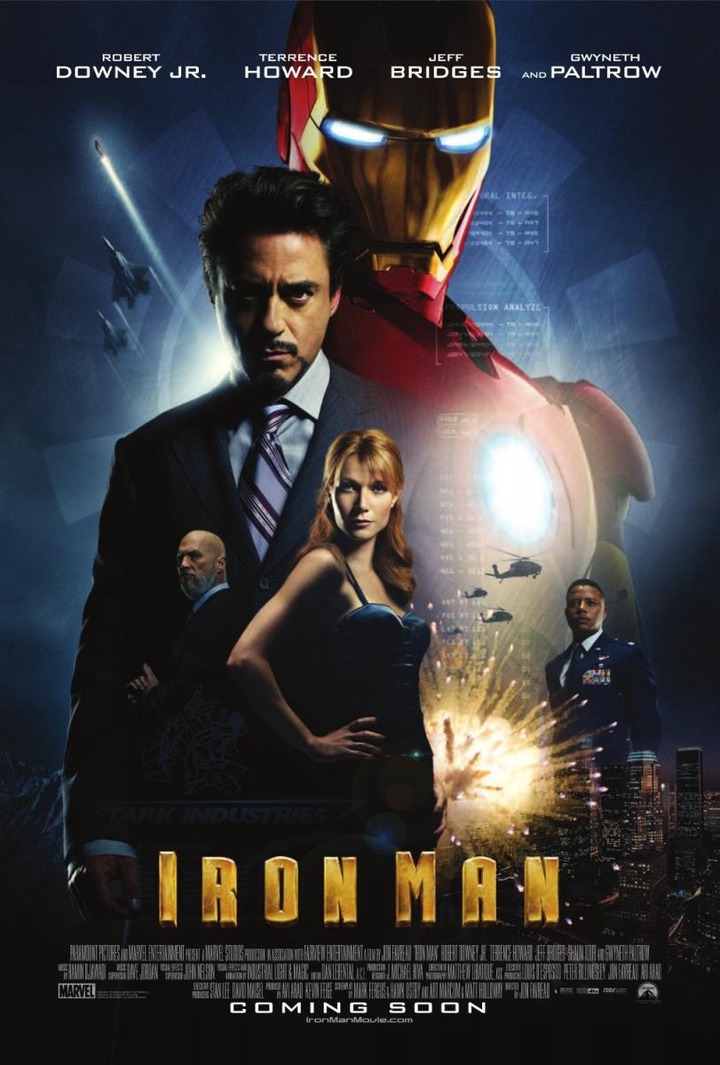 Iron Man is a 2008 American superhero film based on the Marvel Comics character of the same name(Iron Man). Produced by Marvel Studios and distributed by Paramount Pictures, it is the first film in the Marvel Cinematic Universe (MCU) and the first in the Iron Man franchise. The film stars Robert Downey Jr. as Tony Stark / Iron Man alongside Terrence Howard, Jeff Bridges, Shaun Toub, and Gwyneth Paltrow. In the film, following his escape from captivity by a terrorist group, world famous industrialist and master engineer Tony Stark builds a mechanized suit of armor and becomes the superhero Iron Man. 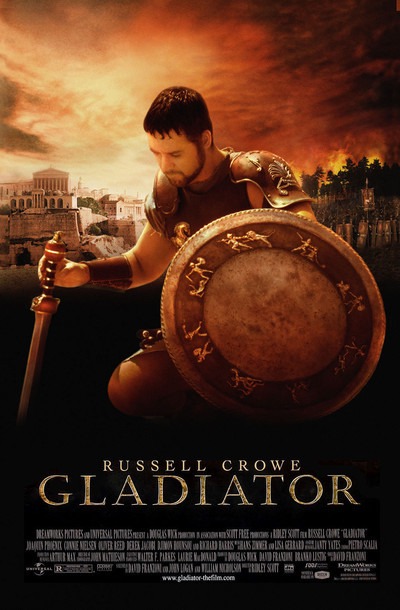 Gladiator is a 2000 epic historical drama film directed by Ridley Scott and written by David Franzoni, John Logan, and William Nicholson. The film was co-produced and released by DreamWorks Pictures and Universal Pictures. It stars Russell Crowe, Joaquin Phoenix, Connie Nielsen, Ralf Möller, Oliver Reed (in his final role), and others. Crowe portrays Roman general Maximus Decimus Meridius, who is betrayed when Commodus, the ambitious son of Emperor Marcus Aurelius, murders his father and seizes the throne. He was then reduced to slavery, and had to become a gladiator where he rises through the ranks of the arena to avenge the murders of his family and his emperor.

Indiana Jones and the Last Crusade(1989) 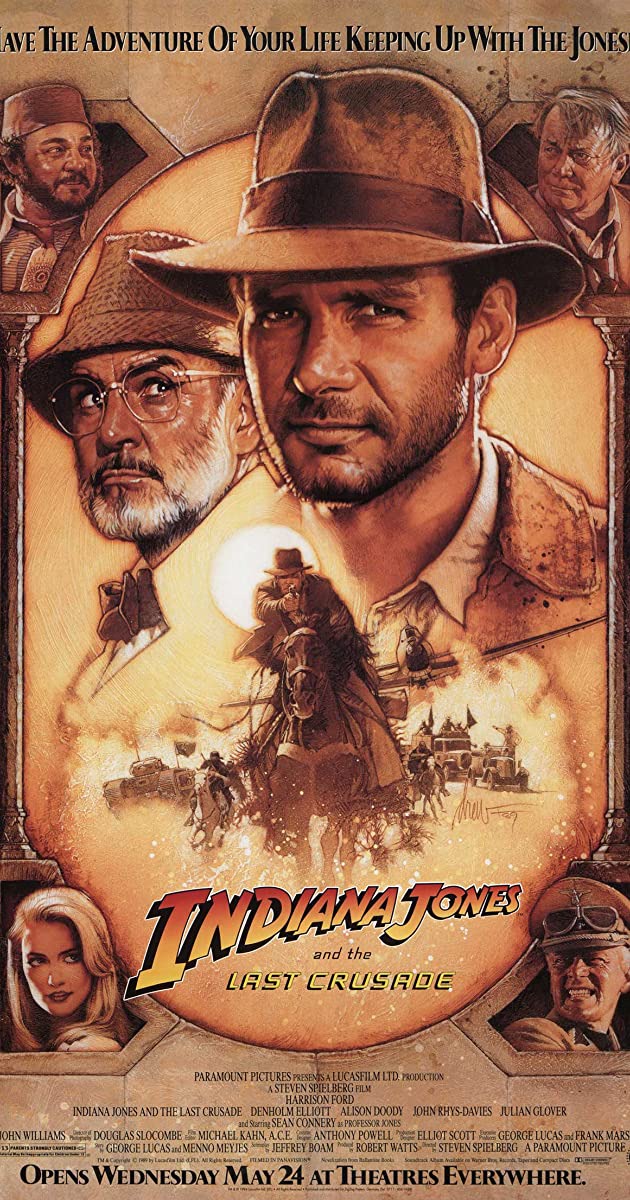 Indiana Jones and the Last Crusade is a 1989 American action-adventure film directed by Steven Spielberg, from a story co-written by executive producer George Lucas. It is the third installment in the Indiana Jones franchise. It is also the first Indiana Jones film to be rated PG-13. Harrison Ford returned in the title role, while his father is portrayed by Sean Connery. Other cast members featured include Alison Doody, Denholm Elliott, Julian Glover, River Phoenix, and John Rhys-Davies. In the film, set largely in 1938, Indiana searches for his father, a Holy Grail scholar, who has been kidnapped by Nazis. 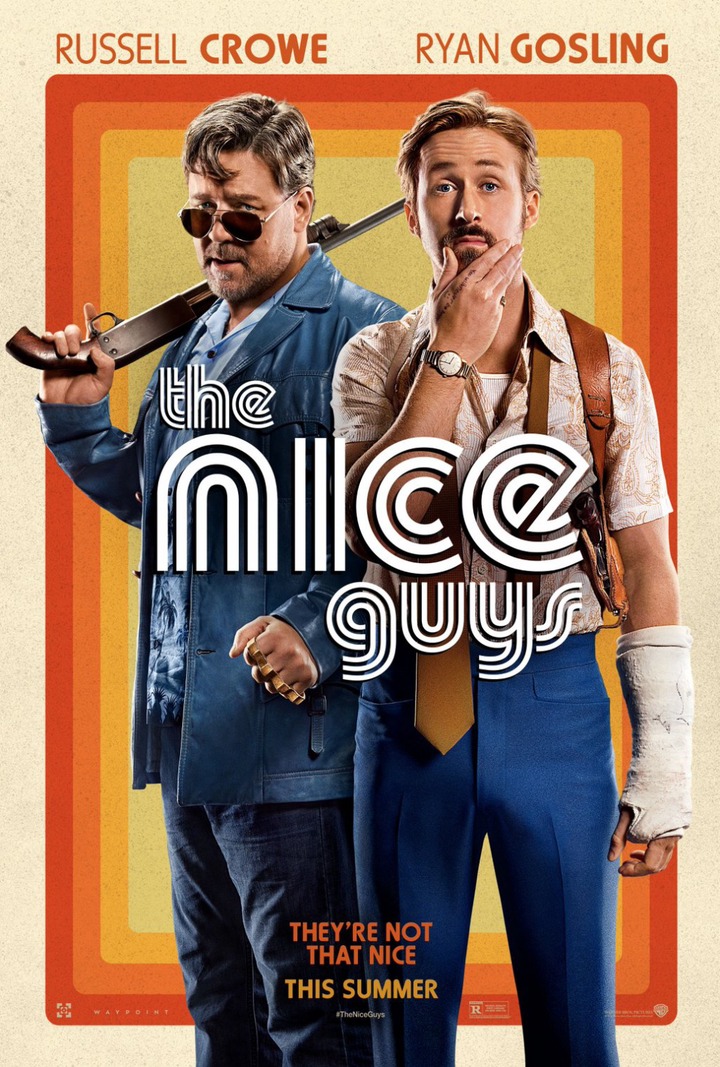 The Nice Guys is a 2016 American neo-noir action comedy film directed by Shane Black and written by Black and Anthony Bagarozzi. The film stars Russell Crowe, Ryan Gosling, Angourie Rice, Matt Bomer, Margaret Qualley, Keith David and Kim Basinger. Set in 1977 Los Angeles, the film focuses on a private eye (Gosling) and a tough enforcer (Crowe) who team up to investigate the disappearance of a teenage girl (Qualley). 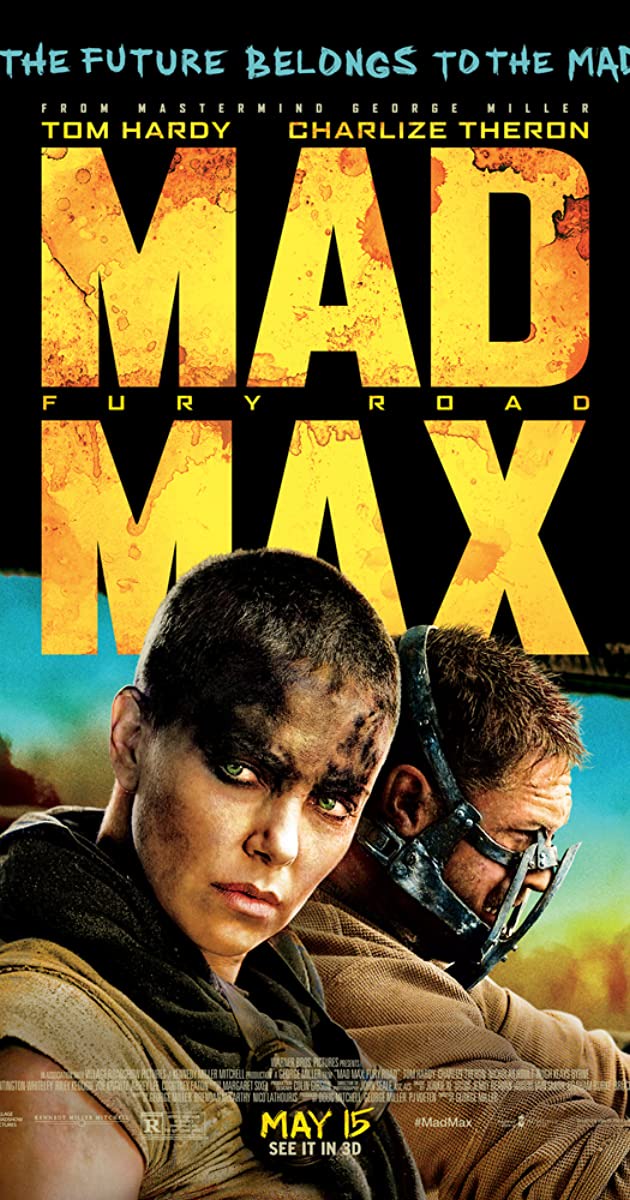 Mad Max: Fury Road is a 2015 Australian post-apocalyptic action film co-written, co-produced, and directed by George Miller. Miller collaborated with Brendan McCarthy and Nico Lathouris on the screenplay. The fourth instalment and a "revisiting" of the Mad Max franchise, it was produced by Kennedy Miller Mitchell and RatPac-Dune Entertainment and distributed by Village Roadshow Pictures in Australia and by Warner Bros. Pictures internationally. The film stars Tom Hardy, Charlize Theron, Nicholas Hoult, Hugh Keays-Byrne, Rosie Huntington-Whiteley, Riley Keough, Zoë Kravitz, Abbey Lee, and Courtney Eaton. Set in a post-apocalyptic desert wasteland where petrol and water are scarce commodities, Fury Road follows Max Rockatansky, who joins forces with Imperator Furiosa to flee from cult leader Immortan Joe and his army in an armoured tanker truck, leading to a lengthy road battle. Marvel's The Avengers or simply The Avengers, is a 2012 American superhero film based on the Marvel Comics superhero team of the same name(The Avengers). Produced by Marvel Studios and distributed by Walt Disney Studios Motion Pictures, it is the sixth film in the Marvel Cinematic Universe (MCU). Written and directed by Joss Whedon, the film features an ensemble cast including Robert Downey Jr., Chris Evans, Mark Ruffalo, Chris Hemsworth, Scarlett Johansson, and Jeremy Renner as the Avengers, alongside Tom Hiddleston, Clark Gregg, Cobie Smulders, Stellan SkarsgaEarth and Samuel L. Jackson. In the film, Nick Fury and the spy agency S.H.I.E.L.D. recruit Tony Stark, Steve Rogers, Bruce Banner, and Thor to form a team capable of stopping Thor's brother Loki from subjugating Earth. 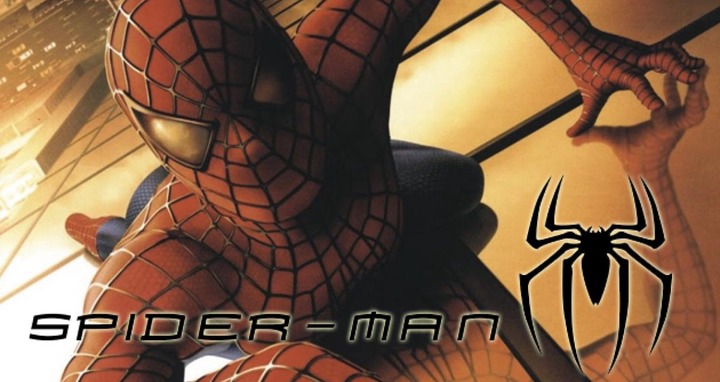 Spider-Man is a 2002 American superhero film based on the Marvel Comics character of the same name(Spider-Man). Directed by Sam Raimi from a screenplay by David Koepp, it is the first installment in the Spider-Man trilogy, and stars Tobey Maguire as the title character, alongside Willem Dafoe, Kirsten Dunst, James Franco, Cliff Robertson, and Rosemary Harris. The film centers on outcast teen genius Peter Parker, who develops spider-like superhuman abilities after being bitten by a genetically-altered spider, and decides to use his newfound powers to fight crime in New York City as Spider-Man. 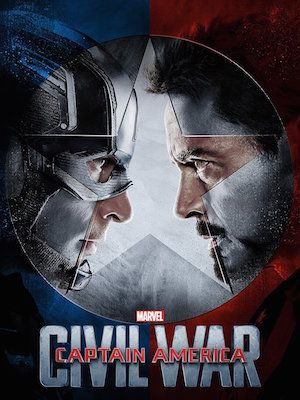 Captain America: Civil War is a 2016 American superhero film based on the Marvel Comics character Captain America, produced by Marvel Studios and distributed by Walt Disney Studios Motion Pictures. It is the sequel to Captain America: The First Avenger (2011) and Captain America: The Winter Soldier (2014), and the 13th film in the Marvel Cinematic Universe (MCU). The film was directed by Anthony and Joe Russo from a screenplay by the writing team of Christopher Markus and Stephen McFeely, and stars Chris Evans as Steve Rogers / Captain America alongside an ensemble cast including Robert Downey Jr., Scarlett Johansson, Sebastian Stan, Anthony Mackie, Don Cheadle, Jeremy Renner, Chadwick Boseman, Paul Bettany, Elizabeth Olsen, Paul Rudd, Emily VanCamp, Tom Holland, Frank Grillo, William Hurt, and Daniel Brühl. In Captain America: Civil War, disagreement over international oversight of the Avengers fractures the team into two opposing factions—one led by Steve Rogers and the other by Tony Stark. 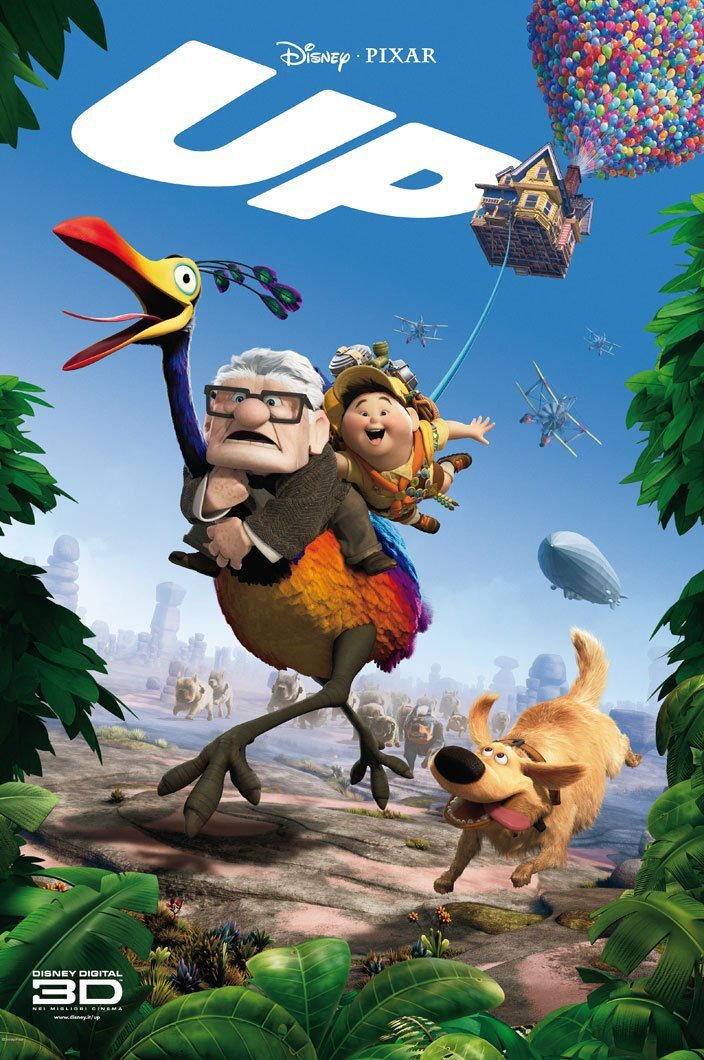 Up is a 2009 American computer-animated comedy-drama adventure film produced by Pixar Animation Studios and released by Walt Disney Pictures. The film centers on an elderly widower named Carl Fredricksen (Ed Asner) and an earnest boy named Russell (Jordan Nagai); by tying thousands of balloons to his house, Carl sets out to fulfill his dream to see the wilds of South America and complete a promise made to his late wife, Ellie. The film was directed by Pete Docter and co-directed by Bob Peterson, who also wrote the film's screenplay with Docter, as well as the story with Tom McCarthy. The music was composed by Michael Giacchino, who had also composed music for The Incredibles and Ratatouille.

If you increase this, it is like an indirect tax - Johnny Hughes to Government Officials