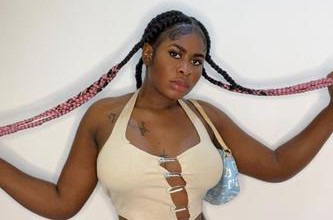 Musician and actress, Yaa Jackson has taken to social media to announce her new stage name.

According to her, she's now called 'Konadu Marfo'. She also pleaded with her followers to call her by the new name instead of Yaa Jackson.

In a post shared by herself on Instagram it says, "Call me Konadu Marfo from today please instead of Jackson".

Also, she can be called 'Yaa Marfo'. Yaa Konadu, known in showbiz as Yaa Jackson was born on 18th October 2000. Yaa Jackson hails from the Ashanti region of Ghana. She's the only daughter of Mr. Jackson Konadu Bentum and Mrs. Lydia Konadu Bentum. Yaa Jackson began her educational journey at the Salem Educational Complex in Kumasi. Not much is known about her secondary school life.

Yaa Jackson is known for songs like “Tear Rubber, Obra, Slay Queens, Me Kondo" amongst others.

I Will Speak The Truth: A Company In Ghana In Takes 9% Share Of Every Loan We Collect- Captain Smart

Young Lady Causes A Stir Online After Showing Off Her Boyfriend

John Dramani Mahama Is The Best President In The Fourth Republic When It Comes To Infrastructure.