By Niklausmichealson (self media writer) | 1 year ago 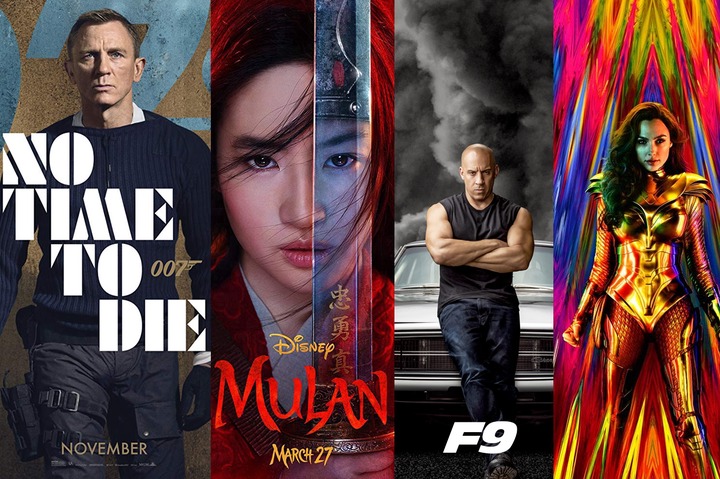 When the latest James Bond premiere was called off because of the coronavirus outbreak, it came as a shock. But that was just the first in a cascade of movie blockbusters being canceled or postponed, causing a reshuffle of the release schedule throughout 2020 and into 2021. Christopher Nolan's Tenet cautiously reopened some theaters, but Wonder Woman 1984 and the Candyman reboot are the latest to be disrupted.

Delays have hit big movies including Marvel's Black Widow, James Bond thriller No Time to Die, F9, and A Quiet Place Part 2. Some big films are postponed indefinitely while others, like Disney's Mulan and Tom Hanks thriller Greyhound, changed course for streaming services instead. The ripples will be felt throughout 2021 and beyond, as the Avatar sequels and the next Star Wars movies are all affected. We've laid out the revised box office calendar to show when (or if) 2020's big movies are coming to a movie theater near you

The health and well-being of people around the world remains the most important thing, but these movie cancellations affect more than just the balance sheets of major studios. Movie theater closures are just one sign of the disruption the coronavirus is wreaking upon people and businesses around the world. You can stream a bunch of recent releases early, but a return to the movies will signal a return to normality when we come out the other side of this strange time.

Here's how the new release dates stack up:

Tom Hanks stars in and directs this World War II epic about a convoy of ships battling U-boats. Apple TV Plus announced May 19 that it will premiere Greyhound on the streaming service, making this one of the biggest movies to skip theaters entirely. It's a coup for Apple's streaming service, which has created plenty of original content but still has some catching up to do against Netflix and Amazon Prime Video.

Tenet tested the waters for theaters around the globe.

When the rest of the summer blockbusters delayed, Warner Bros. held its nerve and stuck to the planned date much longer than the rest. Christopher Nolan's time-twisting thriller therefore felt like the big hope for movie theaters desperate to reopen, but after shuffling back a couple of weeks and then moving again to August, Tenet was entirely removed from the schedule in mid-July. It finally opened internationally Aug. 26 before heading to select US theaters over the Labor Day weekend in September. But even if theaters are open, audiences are still wary of gathering, and box office receipts are likely to suffer as a result. Whether or not you want to risk it, read our spoiler-free review of Tenet or our (spoiler-packed) explanation of Tenet's ending and most WTF questions.

The One and Only Ivan (streaming now)

As the movie theaters pile up with blockbusters, Disney has moved some of its films from the theatrical schedule straight to streaming service Disney Plus. You can watch Artemis Fowl and The One and Only Ivan online after their theatrical releases were cancelled.

Easily one of the most troubled movies ever to limp into production, X-Men spinoff The New Mutants was originally slated to be released in 2018, and had already been moved twice when Disney's acquisition of Fox set it back yet again. That made the fourth postponement for the teen-centric comic book chiller starring Anya Taylor-Joy and Maisie Williams, before a late August release date was booked in. It's finally been released, marking a disappointing end for the X-Men movie series.

Keanu Reeves and Alex Winter return in this long-awaited sequel, which was bumped a little up the schedule -- but more importantly, at Comic-Con 2020 the filmmakers announced a day-and-date on-demand release so you can watch online even if you can't make it to theaters. Read our review of Bill and Ted Face the Music here. Excellent!

Mulan was pulled from theaters just before it was due to be released.

Disney's live-action Mulan reboot has been something of a canary in a coalmine for spring and summer movies, as it's been nudged incrementally up the calendar before getting an online release for an unexpected price. It was first postponed in March, less than two weeks before it was supposed to open. Disney then reshuffled its entire slate on April 3, moving Mulan to late July and then August. But as July came to an end and the theater industry still wasn't up and running, Disney took it off schedule entirely -- and then, finally, made the decision to release it on streaming service Disney Plus for an extra cost. Despite missing the big screen, the new version of Mulan for 2020 is still timely and thrilling (even without the songs).

Janelle Monae stars in this chilling horror story about a modern woman transported to the era of slavery. Originally slated to open in April and then August, Antebellum now skips theaters for a streaming release in September.

David Attenborough's latest nature documentary, made with the World Wide Fund for Nature, was postponed from its original spring release. Interestingly, it wasn't just the cinema release that was canceled: The film was due to stream on Netflix in April, but that was suspended too. "Our decision to postpone the film release [allows] viewers to enjoy the big-screen experience," said the WWF in an email to CNET, "as well as giving Sir David Attenborough's message the incredible reach afforded by the Netflix platform." The documentary was rescheduled for selected theaters in late September followed by a streaming premiere Oct. 4.

Florence Pugh and Scarlett Johansson wait a little longer to team up in Black Widow.

Originally scheduled for May 1, Marvel's Black Widow has been pushed back to Nov. 6. In March, Disney initially postponed the film to an unspecified date, then on April 3 confirmed Black Widow would debut this winter in a reshuffle of the entire Marvel Cinematic Universe -- including Captain Marvel, Thor, Black Panther and Doctor Strange sequels due over the next couple of years.

Daniel Craig's final outing as 007, directed by Cary Fukunaga and co-written by Phoebe Waller-Bridge, was the first major movie to delay release. No Time to Die had already lost its original director and changed its release date twice, but producers feared the closure of many theaters around the globe due to coronavirus would harm box office takings in lucrative international markets. The delay was announced March 4, a week before the World Health Organization declared a pandemic. The James Bond installment will now open in the UK on Nov. 12 and the US on Nov. 20 (slightly earlier than earlier announced).

Pixar takes you on a jazz odyssey for this musical animation, which stuck to its planned early summer release date for a while. Disney has so many films in the schedule it wasn't clear when there'd be a new slot for Soul should theaters remain closed, but it's now been moved to November.

Content created and supplied by: Niklausmichealson (via Opera News )