By GeneralConceptMedia (self media writer) | 1 year ago 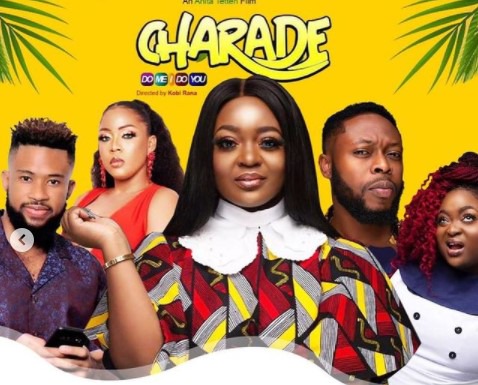 Brimstone Productions is presenting an Anita Tetteh film dubbed Charade: You Do Me I Do You. The film features Jackie Appiah and kalybos. Interestingly, it serves as the opportunity for them to costar in one project.

Kobi Rana who directed the film gave people a glimpse of what they should look out for in the movie. Even though the synopsis is not out yet, he promised in July 2020 it would be a “funny war.”

Aside from Jackie Appiah and Kalybos, it also starred Rosely Ngissah and Jessica Williams. Richard Asante professionally known as Kalybos most recently appeared in Slay. Elvis Chucks produced it and premiered it on Netflix on 26 April this year. He acted alongside the Nollywood multiple award-winning veteran actor Ramsey Nouah, Amanda Dupont and his very own colleague, Bismark the Joke.

Jackie Appiah on the other hand appeared in Misdeed. It was produced by Uchenna Mbunabo and premiered on Toplovetv. Also, she appeared in Harvest of Grief by the same producer.

In 2020, Ghanaians speculated that these two actors were dating. Interestingly, the rumours emanated from an awesome series of photos on their IG handles. Besides, Kalybos went further to shower praises on Jackie for being humble despite her enormous wealth. According to him, Jackie is the definition for the saying “Silence is golden.”

Well, nature has proved all the speculations untrue with time. Watch these favourite stars in the romantic comedy Charade; You Do Me I Do You coming September 11. It premieres at City Hall (Snap Cinema), Vienna City (Tema) and Crown Liberty Hotel (Old Barrier, Kokrobite). The time is 6 pm, 8 pm and 10 pm respectively.