10 Of The Largest Insects In The World

By KkCabobo (self meida writer) | 21 days

10 of the Largest Insects in the World 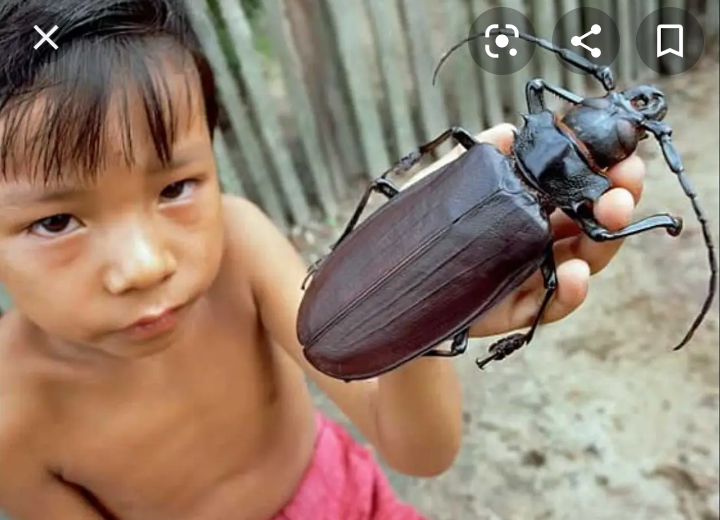 The largest insects that ever existed were dragonfly-like bugs of the extinct order Meganisoptera, sometimes referred to as griffinflies, which lived around 317 to 247 million years ago. Griffinfly wingspans could reach up to 28 inches, and their huge mandibles made them formidable predators. Although no insects have reached the size of the massive griffinflies since the Paleozoic Era, there are still a few extant species of insects that are nevertheless large enough to give even seasoned entomologists a good fright. The Amazon rainforest is home to many large beetles, but none of them compare in length to the titan beetle (Titanus giganteus). This massive beetle can grow up to 6.6 inches long, making it the largest beetle in the world in terms of sheer body size. While scientists have never found any specimens of titan beetle larvae, they have discovered boreholes in dead trees that they believe were created by these larvae. Based on the size of these boreholes, it is estimated that the larvae of titan beetles can grow to be 2 inches wide and up to 1 foot long.

The titan beetle also has mandibles that can easily snap a pencil in half and can even rip into human flesh. Believe it or not, this beetle is actually a draw for adventurous tourists, and many ecotourism agencies in South America advertise pictures of them in their pamphlets. The longest insects on the planet are members of the order Phasmatodea, commonly known as stick insects, which have evolved a bizarre shape to hide from predators among branches, twigs, and foliage. Resembling actual sticks, stick insects can range greatly in size depending on the species, but many of them measure over 1 foot long.

The longest stick insects belong to the genus Phobaeticus, including the species Phobaeticus serratipes and Phobaeticus chani, both of which can reach lengths of around 22 inches and previously held the world records for longest insect before being surpassed by newly discovered species. Currently, according to Guinness World Records, the world record for the longest insect is held by the species Phryganistria chinensis, which was discovered in China in 2016, with one specimen measuring 25.2 inches. Members of the genus Deinacrida, known as giant wētās, are enormous insects endemic to the island of New Zealand that are closely related to crickets. Giant wētās usually grow up to 4 inches long and weigh up to 1.2 ounces, roughly the weight of a sparrow. These massive bugs are among the heaviest insects on earth. One female specimen of the species Little Barrier Island giant wētā (Deinacrida heteracantha) was found to weigh 2.5 ounces, the heaviest adult insect ever observed. Based on weight and bulk, members of the beetle genus Goliathus, known commonly as Goliath beetles, are strong contenders for the title of world's largest insect. These enormous beetles are found throughout Africa, and males of this genus can measure over 4 inches long and weigh over 2 ounces. However, Goliath beetles are even more massive in their larval stage, weighing as much as 3.5 ounces, making their larvae the heaviest insects on earth. While a 2.5-ounce giant wētā specimen still holds the record for heaviest adult insect, some entomologists believe that certain adult Goliath beetles in the wild could weigh over 2.5 ounces and break the record — but they have yet to be caught and weighed by scientists. Common across the Malay archipelago, the bird-sized atlas moth (Attacus atlas) is considered the largest moth in the world. Atlas moths are so big that their cocoons are occasionally used as purses for pocket change in Asia. Their wings are some of the largest on Earth with a wingspan that can measure up to 10 or 11 inches and a total surface area of about 25 square inches. Only the Hercules moth (Coscinocera hercules), whose wings can reach a surface area of 46 square inches, has a larger wing surface area than the atlas moth, and only the white witch (Thysania agrippina), with a wingspan of up to 14 inches, has a longer wingspan. However, the atlas moth still exceeds these two species in size when mass, wingspan, and surface area are all taken into account. The larvae of this species are also enormous. Atlas caterpillars can reach lengths of almost 5 inches and weigh as much as 2 ounces. Members of the wasp genera Pepsis and Hemipepsis, known as tarantula hawks, are the largest wasps on earth, generally measuring around 2 inches long. These enormous wasps are so large and ferocious that they are capable of hunting tarantulas, which they use as a food source for their massive larvae. A female tarantula hawk will lay eggs in the tarantula's abdomen while it is still alive, and her offspring will then eat the spider alive after hatching.

The species Pepsis pulszkyi is the largest tarantula hawk and thus the world's largest wasp, reaching a length of up to 2.7 inches with a wingspan of 4.5 inches. Tarantula hawks are also known for their massive stingers, which can reach lengths of over a quarter of an inch, and their stings are considered some of the most painful insect stings in the world. The pain resulting from a sting from the tarantula hawk species Pepsis grossa is second only to that of the bullet ant. Members of the fly family Mydidae, commonly known as mydas flies, can range in size. Many of them are among the largest flies in the world, reaching lengths of around 2.4 inches. One species of mydas fly, Gauromydas heros, is the largest species of fly on Earth, reaching a length of 2.8 inches with a wingspan of 3.9 inches. Common houseflies (Musca domestica), on the other hand, are generally only a quarter of an inch long with a wingspan of around half an inch. The Hercules beetle (Dynastes hercules) is the longest species of beetle on Earth and one of the world's largest flying insects. The extreme lengths of Hercules beetle specimens are a result of their massive horns, which are only found on male beetles and are used to fight other males during disputes over mates. A male Hercules beetle's horn can account for more than half of its length, allowing them to reach lengths of up to 7 inches. The body of a Hercules beetle excluding the horn ranges in length from around 2 inches to 3.3 inches. The species is also quite wide, with body widths of anywhere from 1.1 to 1.7 inches. Most members of the insect order Hemiptera, known as the true bugs, are not particularly large, paling in comparison to stick insects or giant wētās. However, one family within this order, Belostomatidae, or giant water bugs, contains species that can approach the lengths of the world's largest beetles. These enormous insects, also known as toe-biters and alligator ticks, can grow to be as long as 4.7 inches. The biggest water bugs belong to the genus Lethocerus, with the species Lethocerus grandis and Lethocerus maximus both vying for the title of the biggest.

Known as voracious predators in the streams and ponds where they live, giant water bugs can deliver a painful bite with their giant pincers and inject venomous saliva into their prey. However, they are also eaten by humans and are considered a delicacy in South and Southeast Asia. The Queen Alexandra's birdwing (Ornithoptera alexandrae) is the largest butterfly in the world. Found only in remote regions of Papua New Guinea, the species was discovered in 1906, and the first specimen ever found was taken down using a shotgun. Females are slightly larger than males, with wingspan approaching and even exceeding 10 to 11 inches. Males tend to have wingspans that range from 6 to 8 inches. Furthermore, the body of a female Queen Alexandra's birdwing can measure slightly more than 3 inches long.

The species is highly prized by butterfly collectors due to its rarity and status as the world's largest butterfly, and single specimens can fetch prices of several thousand dollars on the black market. While poaching poses a slight threat to the survival of this species, habitat destruction is an even more significant threat, as the forests where the Queen Alexandra's birdwing lives are increasingly cut down to make room for oil palm, cocoa, and rubber plantations, forcing the IUCN to list the butterfly as endangered.

These Days My Greatness has been A Debate - Shatta Wale