The largest animal to ever step foot on Earth. Its weight is equal to 14 elephants combined.

By the_Kelvin_guy (self meida writer) | 28 days

Scientists estimated the enormity of the size of this dinosaur by looking at the size of its thigh bone. Paleontologists announced the discovery of fossil bones of a dinosaur believed to be the largest creature ever set foot on Earth in Argentina.

Given the enormity of the dinosaur's thigh bone, scientists have estimated that it is about 40 meters long and 20 meters high. The weight of the dinosaur according to scientists' estimates is about 77 tons or the equivalent of the weight of 14 African elephants and it weighs about seven tons more than the largest dinosaur that had been discovered before which is the dinosaur called "Argentinosaurus."

Scientists believe that the discovered dinosaur is a new species of the "titanosaur" group which are huge herbivorous animals that lived in the late Cretaceous period.

By chance, the dinosaur fossils were discovered after they were first found by a local farmer in the desert area near the town of La Felicia, about 250 kilometers west of Trelew in the Patagonia region of southern Argentina. 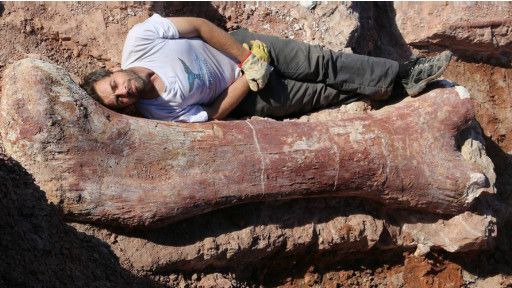 The dinosaur fossil bones were then extracted by a team of paleontologists from the Egidio Feroglio Fossil Museum in Trelio led by Jose Luis Carbaledo and Diego Ball.

Scientists found parts of the skeleton of seven individuals totaling 150 bones, all of them "in excellent condition." They then estimated the length of the dinosaur at 40 meters and the height of 20 meters. By measuring the length and circumference of his the thigh bone, scientists estimated his weight at about 77 tons.

They do believe it is the largest animal ever to set foot on Earth. The herbivorous dinosaur lived in the forests of Patagonia between 95 and 100 million years ago, given the age of the rocks in which its bones were found.

Despite its enormity, scientists have not named this dinosaur yet. The researchers said, "We will call it a name that describes its magnitude and also the farm owners who alerted us to this discovery."