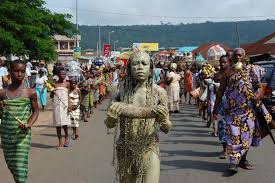 One is at a complete lost when people who even should have known better strongly argue that, true physical development of committees, towns for that matter Regions can only happen if they are divided into smaller Regions.

The question then is; why do we blame our colonialist for dividing Africa among themselves for ease of governance?

Now our politicians say we are the same people so we have to do away with the colonialist artificial boundaries hence the formation of International Unions e.g. Economic Community of West African States (ECOWAS) and others.

Apart from Dr. Kwame Nkrumah’s Seven (7) years Development plan, successive government have not drawn any plan for the holistic development of the Country.

Ghana over the years has rather experienced persistent un-coordinated development plan policies, lack of vision from those at the helm of affairs, greed, selfishness, corruption, nepotism, and tribalism. All these vices have clouded the sense of judgement of those who formulate development policies of the country.

Our politicians have therefore failed us to the extent that, citizens in some parts of the country have bought into the parochial idea that, development can only happen when they are separated from their own kings with whom they have long co-existed in peace and unity. Why do they want to divide the people for political gains whilst hiding behind development?

The question I would like politicians who are saying it is the people who are asking for the division of the Region to answer are as follows.

Who are those who formulate physical development policies in the country?

Who determines the type of project, where it should go and how many should go there?

Secondly, where are the institutions that oversee the implementation of development projects in the country? Are they in the Regions or Accra?

Can somebody educate me on the mechanism used in the distribution of development projects such as roads, housing, health, water etc. among the Regions?

During the 2016 General Elections Campaign, both the NDC and NPP promised to create some new Regions in the country as a response to the demands of the people from those areas.

Yes, we can therefore say that the NPP Government is only responding to the request of the people by creating the Ministry of Regional-Organization and Development to prepare towards the creation of the new Regions.

Furthermore, the 1992 Constitution of Ghana also makes provision for the right of the people to make such request.

Once again, on what bases is the Government yielding to the request of the people? Is it because of lack of development project to those areas or because of the vastness of these Regions?

If the Government is saying it is because of the vastness of the Regions, then their reasoning falls flat. Let us look at smaller countries like Gambia, Togo, Sierra Leon and Benin how developed are they as compared to Nigeria, La Cote D’voir, Algeria, Egypt and others?

There is an adage in Ewe which says that “if a forest is not near you, you cannot take a rope from it” so let me go back to the Volta Region.

When the commission of enquiry visited the Volta Region there were mixed reactions from the people in the region on splitting it. A lot of questions were asked about the intension to divide the region again.

Is Volta Region among the largest regions in Ghana? And is it a fact that the South Volta is more developed than the North? The answer is a big No.

Let us look at some projects started years back in the south and are yet to be completed, (a) Regional Police Headquarters was started some Thirty (30) years ago and it is yet to be completed, (b) the Construction of the Regional Center for National Culture (CNC) started Twenty-Five (25) years ago and only God knows when it would be completed. What about the Ho Sports stadium? Apart from the Social Security and National Insurance Trust (SSNIT) Flats and Mawuli Estates built by the State Housing Corporation about forty (40) years ago, not a single block has been laid anywhere adding up to the housing needs of the people in the region, but there are affordable housing projects on going in others parts of the country.

Is it not interesting to note that the Chiefs and people of Ho led by the late Togbe Pi Bansa III, the late Togbe Adase IV and Togbe Howusu XII the Awafiaga of the Asogli State, had to lobby the PNDC government before the Regional Hospital (Trafalga) was started?

In fact, they had to send Yams and cow to Accra to support the hosting of the tenth Ministerial meeting of the Non Aligned Movement Conference in Accra in 1991.

Let us travel on the Ho-Aflao road, Ho -Kpenoe -Takla to Hodzo roads, Ho-Sokode, Bame, Kpeve roads, Sokode-Abutia to Juapong roads, and Adaklu roads. You can name them and see if they are better than those in the Northern part of Volta Region.

How many of us know that the sod for the Kofi Annan Peace Keeping Centre was cut at Akoefe in the Ho Municipality by the NDC government but when the NPP government came to power, the then Minister of Defense in the President John Kuffour’s government re-located it to Accra.

In fact, the then Minister said the site was in a village in the region hence the relocation. If we should go by the argument that splitting an area will lead to its development, why leave out the larger regions like Ashanti and Eastern Regions? Why was the Volta Region completely left out in the creation of 38 new Metropolitan, Municipal and District Assemblies (MMDA)? We all know that all things being equal decentralization is the only true way rapid development can take place hence the District Assembly Concept.

The genesis of what has come to be known in history as the “Ewe problem” started as far back as 1580. When the Portuguese traders from their headquarters in Elmina had established themselves in Ajuda/ Whydah/ Omidah/ Slefe.

Britain watched the energetic advance of the French in West African and the conviction downed on the Colonial Officer at Downing street that serious attempts would have to be made to reach an understanding with that country for drawing a line of demarcation between the portions of the West African Coast over which respectively, the two powers should be at liberty to acquire and exercise political influence.

For the longer they delayed coming to settlement the higher would be the price each would have to pay.

The 1st partitioning of Ewe land was in 1884-1890 from the 6th of July, 1884, the pressure generated by Dr. Gusting Nachtigal and the German presence in Togoland, prompted boundary agreements between Great Britain and Germany which split the Ewe territory between the Gold Coast and Togoland.

The partition was completed in 1890 under that agreement. Anlo, Some, Klikor, Peki, and Tongu became part of the Gold Coast Protectorate and a German protectorate was proclaimed over Togoland (a new creation). Gains were therefore consolidated by the two governments through the introduction of jurisdiction and initiation of development programmes.

The second partition of Eweland started in 1914-1918. When the German Togoland was conquered in August 1914 by combined French and British units from neighboring territories of the Gold Coast and Dahomey (Benin), a provisional Agreement came into being between Great Britain and France and Togoland was divided before the Peace Treaty by which a greater Western Togoland including Lome all the Coast and German railways went to Britain and the lesser Eastern Togoland made up of the hinter land went to France.

The 3rd Partition begun in 1919-1920. Under Article 119 of the Versailles Peace Treaty, Germany renounced all rights over Togoland and her other overseas possession in favour of the Principal Allied and Associated powers

Those traditional rulers in the region who are of the view that the creation of New Regions is the panacea to development should be prepared for a day is coming that certain tribes and ethnic groups would ask for the creation of traditional areas to help address their needs.

Volta Region is unique and its challenges should be treated with tact and caution for it is made up of almost all the tribes in Ghana.

Splitting the region into two is therefore not what the people want again but a holistic development, period.