These are the three fastest animals on earth

By Ayinga (self meida writer) | 6 days 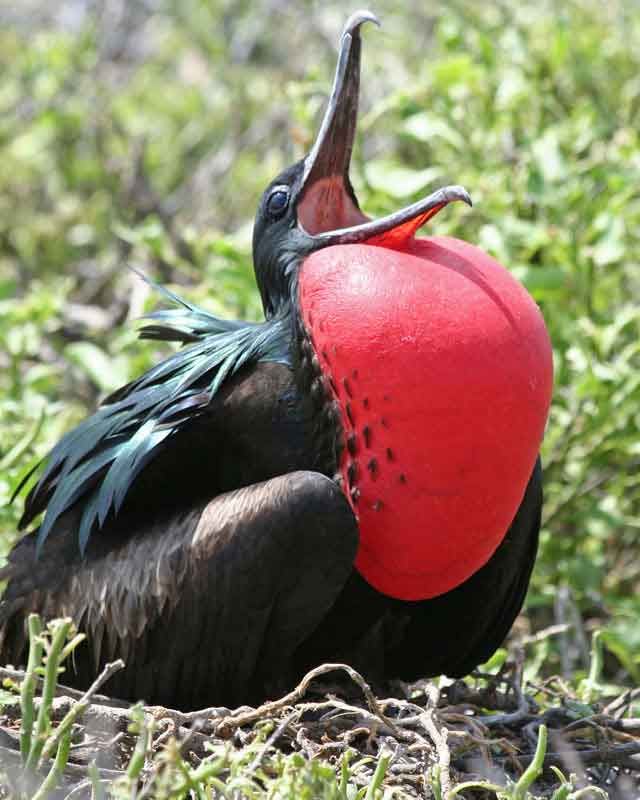 Frigatebirds are a family of seabirds called Fregatidae which are found across all tropical and subtropical oceans. The five extant species are classified in a single genus, Fregata. All have predominantly black plumage, long, deeply forked tails and long hooked bills. Females have white underbellies and males have a distinctive red gular pouch, which they inflate during the breeding season to attract females. Their wings are long and pointed and can span up to 2.3 metres (7.5 ft), the largest wing area to body weight ratio of any bird. 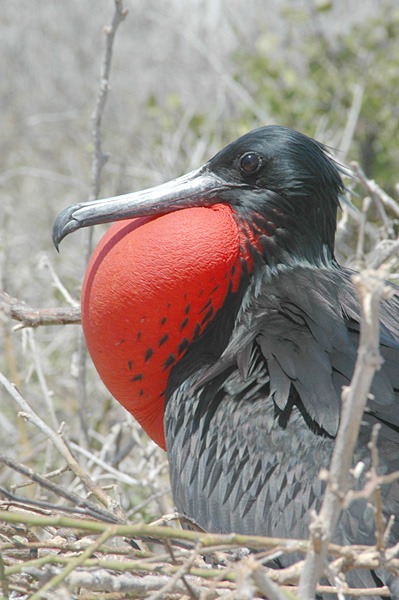 Able to soar for weeks on wind currents, frigatebirds spend most of the day in flight hunting for food, and roost on trees or cliffs at night. Their main prey are fish and squid, caught when chased to the water surface by large predators such as tuna. Frigatebirds are referred to as kleptoparasites as they occasionally rob other seabirds for food, and are known to snatch seabird chicks from the nest. Seasonally monogamous, frigatebirds nest colonially. A rough nest is constructed in low trees or on the ground on remote islands. A single egg is laid each breeding season. The duration of parental care is among the longest of any bird species; frigatebirds are only able to breed every other year. 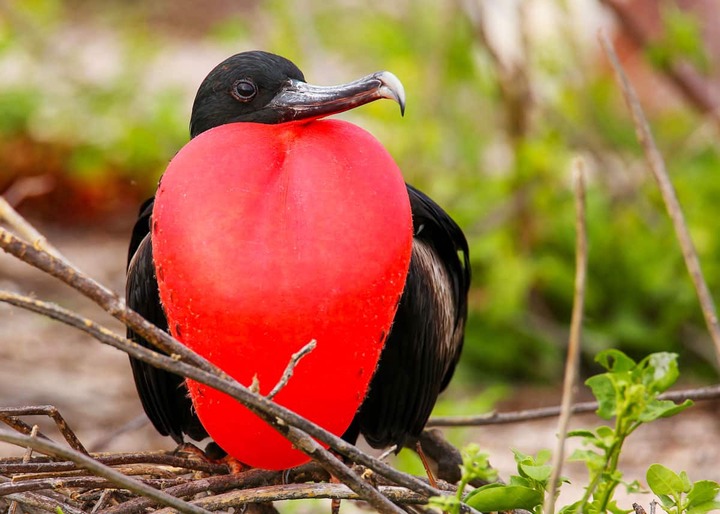 The Fregatidae are a sister group to Suloidea which consists of cormorants, darters, gannets, and boobies. Three of the five extant species of frigatebirds are widespread, (the magnificent, great and lesser frigatebirds) while two are endangered (the Christmas Island and Ascension Island frigatebirds) and restrict their breeding habitat to one small island each. 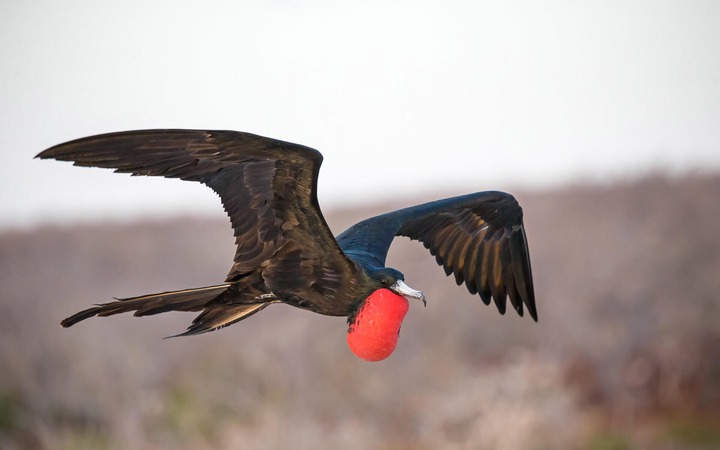 The oldest fossils date to the early Eocene, around 50 million years ago. Classified in the genus Limnofregata, the three species had shorter, less-hooked bills and longer legs, and lived in a freshwater environment. The peregrine falcon (Falco peregrinus), also known as the peregrine, and historically as the duck hawk in North America, is a widespread bird of prey (raptor) in the family Falconidae. A large, crow-sized falcon, it has a blue-grey back, barred white underparts, and a black head. The peregrine is renowned for its speed, reaching over 320 km/h (200 mph) during its characteristic hunting stoop (high-speed dive), making it the fastest bird in the world, as well as the fastest member of the animal kingdom. 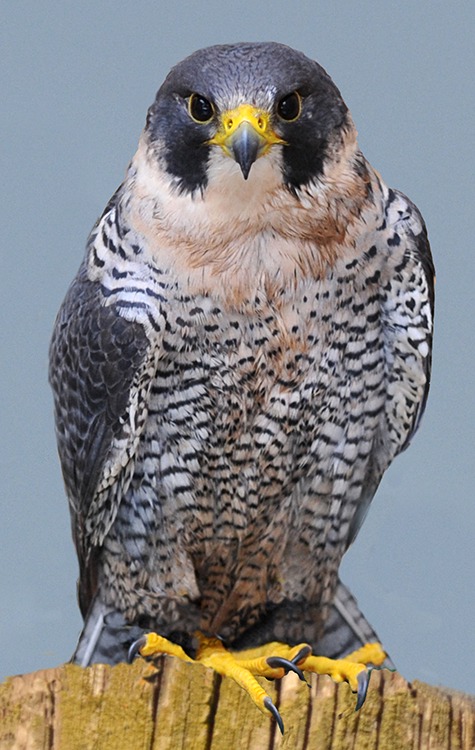 According to a National Geographic TV program, the highest measured speed of a peregrine falcon is 389 km/h (242 mph). As is typical for bird-eating raptors, peregrine falcons are sexually dimorphic, with females being considerably larger than males. 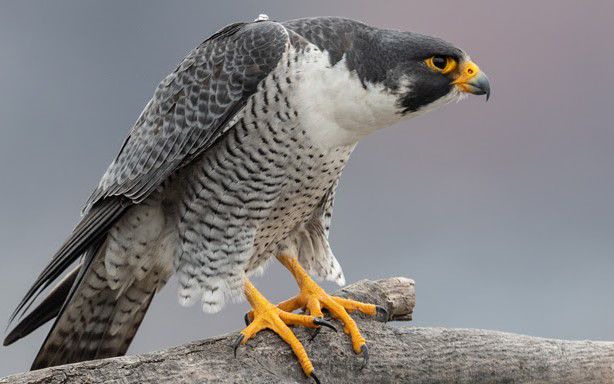 The peregrine's breeding range includes land regions from the Arctic tundra to the tropics. It can be found nearly everywhere on Earth, except extreme polar regions, very high mountains, and most tropical rainforests; the only major ice-free landmass from which it is entirely absent is New Zealand. This makes it the world's most widespread raptor, and one of the most widely found bird species. In fact, the only land-based bird species found over a larger geographic area is not always naturally occurring, but one widely introduced by humans, the rock pigeon, which in turn now supports many peregrine populations as a prey species. The peregrine is a highly successful example of urban wildlife in much of its range, taking advantage of tall buildings as nest sites and an abundance of prey such as pigeons and ducks. 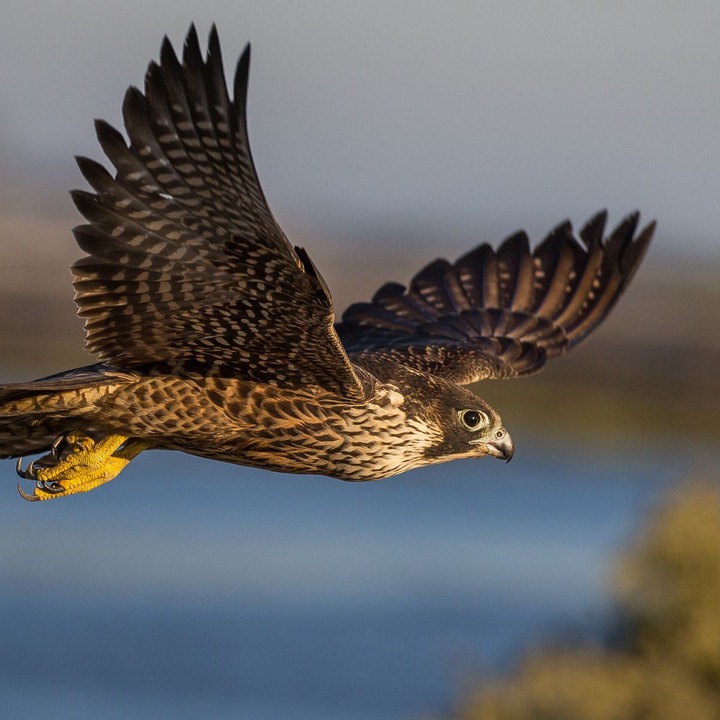 Both the English and scientific names of this species mean "wandering falcon," referring to the migratory habits of many northern populations. Experts recognize 17 to 19 subspecies, which vary in appearance and range; disagreement exists over whether the distinctive Barbary falcon is represented by two subspecies of Falco peregrinus, or is a separate species, F. pelegrinoides. The two species' divergence is relatively recent, during the time of the last ice age, therefore the genetic differential between them (and also the difference in their appearance) is relatively tiny. They are only about 0.6–0.8% genetically differentiated. 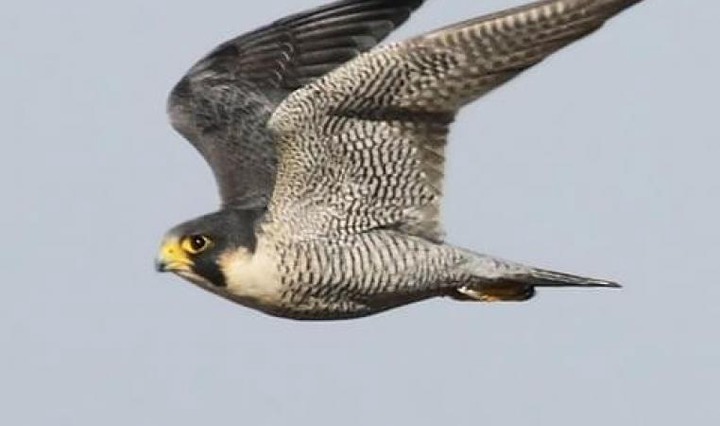 Although its diet consists almost exclusively of medium-sized birds, the peregrine will sometimes hunt small mammals, small reptiles, or even insects. Reaching sexual maturity at one year, it mates for life and nests in a scrape, normally on cliff edges or, in recent times, on tall human-made structures. The peregrine falcon became an endangered species in many areas because of the widespread use of certain pesticides, especially DDT. Since the ban on DDT from the early 1970s, populations have recovered, supported by large-scale protection of nesting places and releases to the wild. 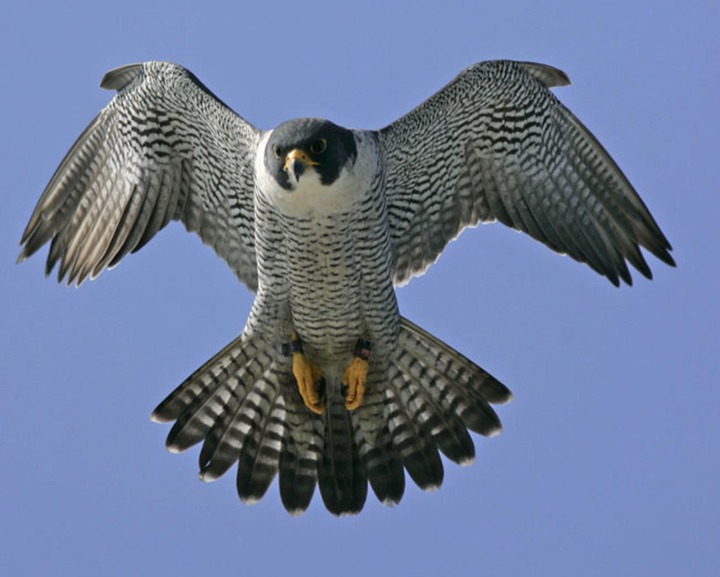 ﻿The peregrine falcon is a well-respected falconry bird due to its strong hunting ability, high trainability, versatility, and availability via captive breeding. 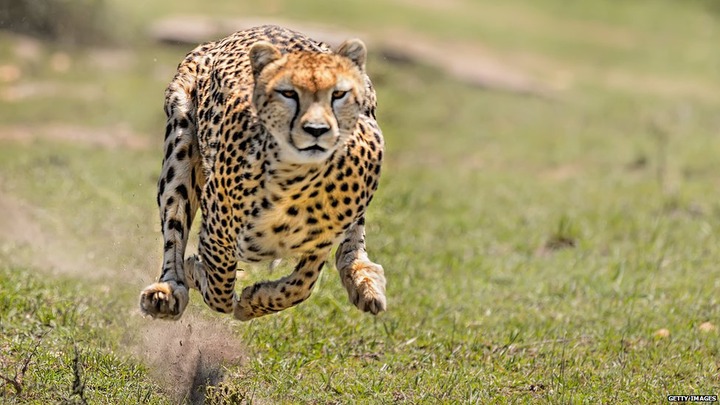 The cheetah is a large cat native to Africa and central Iran. It is the fastest land animal, estimated to be capable of running at 80 to 128 km/h (50 to 80 mph) with the fastest reliably recorded speeds being 93 and 98 km/h (58 and 61 mph), and as such has several adaptations for speed, including a light build, long thin legs and a long tail. It typically reaches 67–94 cm (26–37 in) at the shoulder, and the head-and-body length is between 1.1 and 1.5 m (3 ft 7 in and 4 ft 11 in). Adults weigh between 20 and 65 kg (44 and 143 lb). Its head is small, rounded, and has a short snout and black tear-like facial streaks. The coat is typically tawny to creamy white or pale buff and is mostly covered with evenly spaced, solid black spots. Four subspecies are recognised. The cheetah lives in three main social groups, females and their cubs, male "coalitions" and solitary males. While females lead a nomadic life searching for prey in large home ranges, males are more sedentary and may instead establish much smaller territories in areas with plentiful prey and access to females. The cheetah is active mainly during the day, with peaks during dawn and dusk. It feeds on small- to medium-sized prey, mostly weighing under 40 kg (88 lb), and prefers medium-sized ungulates such as impala, springbok and Thomson's gazelles. The cheetah typically stalks its prey to within 60–70 m (200–230 ft), charges towards it, trips it during the chase and bites its throat to suffocate it to death. It breeds throughout the year. After a gestation of nearly three months, a litter of typically three or four cubs is born. Cheetah cubs are highly vulnerable to predation by other large carnivores such as hyenas and lions. They are weaned at around four months and are independent by around 20 months of age. The cheetah occurs in a variety of habitats such as savannahs in the Serengeti, arid mountain ranges in the Sahara and hilly desert terrain in Iran. The cheetah is threatened by several factors such as habitat loss, conflict with humans, poaching and high susceptibility to diseases. Historically ranging throughout most of Sub-Saharan Africa and extending eastward into the Middle East and to central India, the cheetah is now distributed mainly in small, fragmented populations in central Iran and southern, eastern and northwestern Africa. 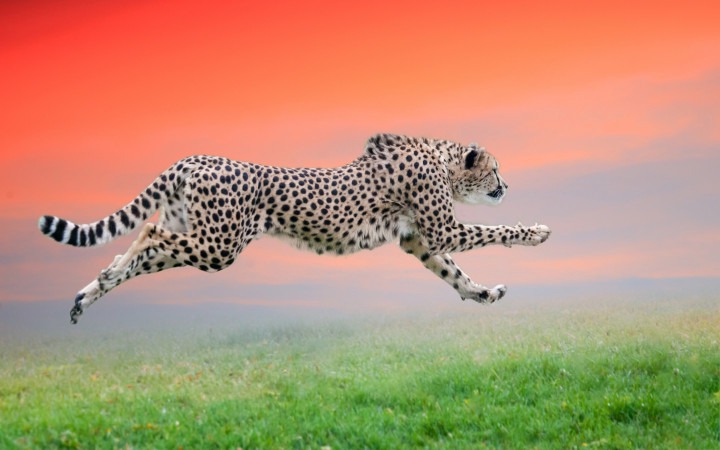 In 2016, the global cheetah population was estimated at around 7,100 individuals in the wild; it is listed as Vulnerable on the IUCN Red List. In the past, cheetahs used to be tamed and trained for hunting ungulates. They have been widely depicted in art, literature, advertising, and animation.

Opinion: They Finally Fixed It.