I bought my tigers for tourism, not to endanger public –Ghanaian Businessman 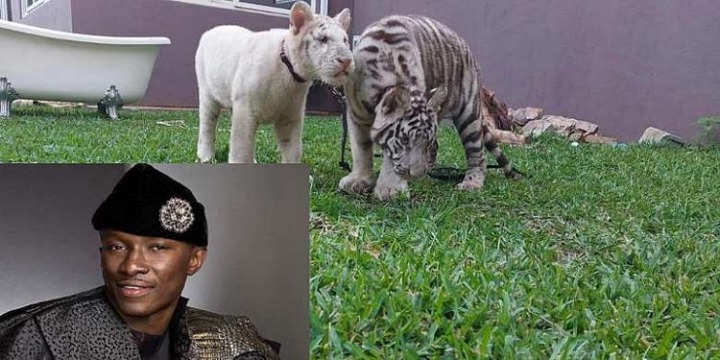 Nana Kwame Bediako aka Freedom Jacob Caesar, a Ghanaian businessman, has replied to public criticism over his ownership of two tigers and their residence on a private estate.

According to him, he bought the animals for tourism purposes rather than to put inhabitants of his Wonda World Estates, Avenue Lincoln, in risk.

Residents of the facility near the British High Commission in Ridge, Accra, complained that the tigers were causing them inconvenience.

Businessman’s tigers to be relocated by Police.

"First and foremost, it is correct. Mr Bediako said, "I have two tigers that I purchased in a bid between Ghana and Dubai in which I was the representative of the private sector who had launched an interest in obtaining these creatures,"Mr Bediako told pressmen today in Accra.

He also said that the seven-month-old tigers were obtained as part of a plan to enhance tourism in the area.

"I wanted to enter the Safari world by ensuring that Ghana becomes the first country in West Africa, East Africa, and Central Africa to have these species, with the exception of South Africa." We wanted to be the first to have it, so I ordered both the male and female versions," he explained.

He claimed that as part of his attempts to protect public safety, he had erected an unique cage to prevent the tigers from escaping.

Mr Bediako claimed he had already spent more than $100,000 on the animals' care and was working to construct a zoo in the country.

We Could Have Done Anything To Survive But We Chose This: Young Entrepreneur, David Tells His Story

Okudzeto is not just a good talker but a hard worker too; check out his recent adventure