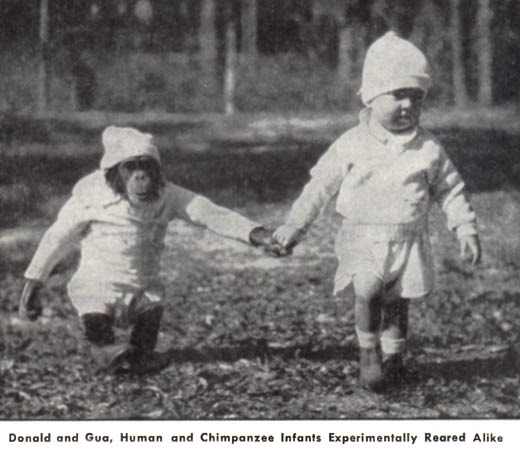 Kellogg and his wife, Luella, had adopted Gua from Cuba at 7-and-a-half months to see if a chimp would act like a human if raised with their 10-month-old son and surrounded by other people — a bizarre thesis in any era but especially in 1931, when chimps were rarely used for behavioral research. For nine months, Kellogg, his wife and other researchers meticulously observed the two babies, an experiment that today would alarm scientists, animal rights activists and child protective services.

Kellogg’s experiment was conducted during the heyday of the eugenics movement, which held that mental and intellectual deficiencies were always nature, always genetic. That contention was bolstered in 1927, when the U.S. Supreme Court ruled in Buck v. Bell that the intellectually disabled could be forcibly sterilized. The ape and the child experiment set out to disprove this theory by showing that environment was more important than genes — that nurture was key. 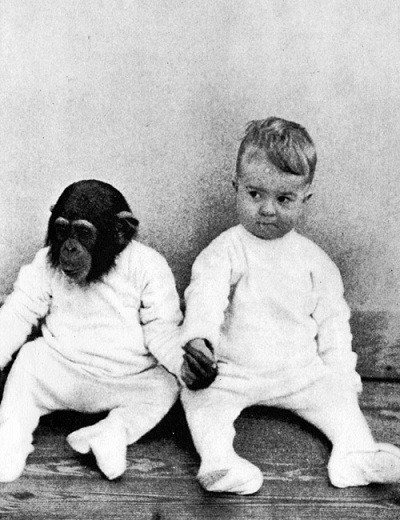 Although the Kelloggs claimed they treated Donald and Gua the same, the parenting wasn’t always loving. They tapped Donald’s and Gua’s heads with spoons to hear the difference in the sound of their skulls; they made loud noises to see who would react faster; they tried to convince Gua not to eat soap bubbles by shoving a bar of soap into her mouth; and they spun Donald around in a high chair until he started crying — all in the name of science.

Today, the experiment would never pass an ethics board. “Experimenting on your own children is highly problematic,” says Jeffrey Kahn of the Johns Hopkins Berman Institute of Bioethics. “Anytime you do an experiment with your own family and your own life, it’s not scientific in the same way as a laboratory study.”

Kellogg touted how much Gua learned and how many human qualities she seemed to develop over the nine months: She walked upright, used a fork and had humanlike facial expressions. But Kellogg’s attempt to instill the power of speech in the grunting Gua was a nonstarter. “That was one last shot to see if you could teach a chimp to talk,” says Andrew R. Halloran, author of The Song of the Ape: Understanding the Language of Chimpanzees. The species’ physiology and brain development simply don’t allow for human communication.

“It could have been an interesting psychological study about how children and chimpanzees both crave companionship,” says Halloran. “If there’s a way to not be isolated, chimps will find it, and that’s what they share with humans. Chimps need companions just like humans need companions.” 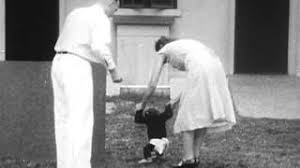 But Luella Kellogg had other concerns that ended the experiment — namely, that Donald was becoming more chimp than Gua was becoming human. Gua and Donald wrestled in a way that looked more like chimp play than how babies interact. Gua taught Donald how to spy on people beneath doors. Donald started biting people. Donald crawled like Gua even after he could walk, and began grunting and barking like his “sister” when he wanted food. This might have been something the Kelloggs should have expected. “If you raise a baby with a puppy, you don’t expect the puppy to learn human traits,” says Kahn, but who hasn’t seen toddlers crawling around on the floor and barking like dogs?

After Luella pulled the plug, Gua was taken away, caged to be the subject of another experiment and died of pneumonia months later. Donald reached adulthood, became a doctor and killed himself at age 42.

They Shot Him; Ofosu Ampofo Got Blinded After The Tear Gas Exploded: Organizers Of Demo Reveal

"It Appears My Days are Numbered on Twitter" - Okudzeto Reveals

The conventional method you can employ to open your spiritual eyes.

One Feared Dead in A Gory Accident at Kumasi