Snake with legs attached to it body

Some zoological photographs are so bizarre that long after they first hit the news headlines, they still continue to circulate online, like restless ghosts doomed to wander forever down the highways and byways of the worldwide web, resisting all attempts to expose them as hoaxes or explain them as grotesque yet nonetheless natural phenomena. One such image that seems to fall into the latter category is the example that opens this present ShukerNature blog post – namely, a supposed one-legged, claw-footed snake from China.

This anomalous serpent made its media debut as far back as mid-September 2009, since when it has been the online focus of various less than credible claims and all manner of decidedly credulous comments, but no rigorous, in-depth assessment. Consequently, I felt that it was high time that this sorry situation was rectified, so here is my own personal appraisal of this very curious case. 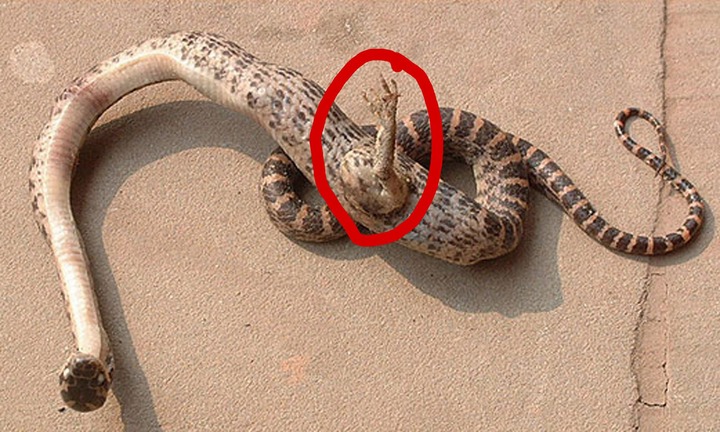 The story broke on 14 September 2009, with news reports worldwide presenting the now-(in)famous photograph reproduced above of a dead snake seemingly possessing a single small but perfectly-formed claw-footed leg, and providing the following scant details concerning it. One typical report appeared in the UK's Daily Telegraph newspaper for that particular date, and provides the standard set of details reiterated in all other media accounts that I have seen. It stated that Mrs Duan (aka Dean) Qiongxiu, a 66-year-old woman from Suining in Southwest China, had woken up during the middle of the night, heard a scratching sound, turned on her bedroom's light, and then, in her quoted words, "saw this monster working its way along the wall using his claw". She was so frightened by it that she grabbed one of her shoes and beat the unfortunate if uncanny serpent to death before preserving its battered carcase – measuring 16 in long and as thick as a human little finger - in a bottle of alcohol. It was subsequently forwarded to the Life Sciences Department at China's West Normal University in Nanchang. Snake expert Long Shuai was quoted as saying: "It is truly shocking but we won't know the cause until we've conducted an autopsy".

Those, then, are the facts of this case – such that they are. Not even the snake's species is identified. However, a popular identity nominated in various internet reptile forum/discussion groups is Dinodon rufozonatum, a colubrid with a wide distribution in East Asia, including China. It measures up to 28 in long, but is very slender, with brown background colouration marked with transverse crimson bands dorsally, pearl-coloured ventrally. It preys upon a wide range of small animals, including other snakes, lizards, small birds, fishes, and frogs, but is not believed to be venomous. This species certainly resembles the mystery snake in the photograph.

As for the results of the autopsy, more than four-and-a-half years later the world is apparently still waiting for them, because as far as I am aware, none have ever been made public. All that we do have, therefore, is supposition, and plenty of it, but nothing substantiated by corroborative evidence. So, based solely upon its appearance as portrayed within this photograph, how can the one-legged snake of China be explained?

Four plausible theories exist (i.e. discounting those claiming it to be an unnatural freak created in some secret laboratory, an alien entity, a radiation-induced mutant, or some paranormal aberration of occult origin).

Theory #1 is that it is a hoax. In other words, either the photograph is a fake image created by computerised photo-manipulation, or it is real but depicts a skilfully-manufactured model or comparable artifact. Despite much online research, I have found no evidence to support either of these possibilities, and none of the famous hoaxbusting websites has outed it either.

Theory #2 is that the creature is genuine and represents a striking, extreme example of atavism, i.e. the spontaneous development by an individual of a morphological feature possessed by far-distant ancestral forms or species but normally lost in their present-day descendants. I have many cases of atavism on file, covering a wide range of examples and species (click here for my ShukerNature blog post on atavistic extra toes in horses). Particularly pertinent to this case, however, are those featuring whales and other cetaceans exhibiting rudimentary external hind limbs – normally, cetaceans lack such limbs and even the pelvic girdle itself is very small. A comparable, but even more specialised situation occurs in snakes.

Millions of years ago, the ancestors of snakes possessed four well-formed legs and two limb girdles, but these became ever more reduced in form during ophidian evolution, so that modern-day snakes have entirely lost their forelimbs and pectoral girdle as well as – in most cases - their pelvic girdle and hind limbs. Famously, however, boas and pythons still possess a vestigial pelvic girdle and rudimentary external hind limbs. These latter limbs take the form of a pair of very small spur-like femur bones (known as pelvic or anal spurs) appressed to their body wall (on either side of the vent in males).

Could the claw-footed leg of China's unipodal serpent wonder therefore be an evolutionary, atavistic throwback to the snakes' distant antecedents? If so, a genetic mutation may have occurred during its embryonic development that somehow unlocked the still-preserved but normally-suppressed code in its DNA for creating a well-formed limb, foot, and clawed digits.

Although the various fully-verified cases of hind-limbed cetaceans demonstrate that such a concept is not beyond the realms of possibility, there are some serious problems to consider when attempting to apply this same scenario to China's legged snake. First and foremost is the anomalous limb's position. Far from being situated in the vicinity of where either the snake's pectoral girdle or its pelvic girdle would be if it too had been recalled into existence via atavism, the leg is located, very oddly, in the middle of the snake's body instead, seeming to emerge from somewhere in the rib-cage. Even in atavism, a recalled appendage normally arises in the anatomically correct location for it, not in some entirely incorrect position. Secondly, the foot's orientation is wrong too, as its sole is facing forward, towards the proximal end of the snake, instead of facing backward, like all animal feet do. Thirdly, the limb, feet, and clawed digits appear to be fully-developed, not rudimentary or at least incompletely formed, like hind limbs in whales and other examples of atavistic appendages normally are. Consequently, I consider it unlikely that the limb of China's legged snake is an atavistic appendage.

Theory #3 is that the leg does not belong to the snake, but rather is from some originally external source that the snake has swallowed, and has burst through its gut and body wall. This could have happened if, for instance, the snake had swallowed whole (as snakes generally do) a seized lizard or toad (both of which are animal types represented in China by species with limbs resembling the snake's ambiguous example), and the still-living victim had kicked out violently while trying to escape from the snake's gut.

Three features of the snake make this prospect a plausible one. Firstly, the region of the snake's body from which the leg is emerging is swollen both fore and aft, which would be consistent with the presence there of the snake victim's ingested body. Click here (and then scroll halfway down the page) to see a photo of a living specimen of D. rufozonatum pictured directly after having swallowed a frog - the size, shape, and position of the swelling inside the snake that is the ingested whole frog look identical to those of the swelling inside China's legged snake. Secondly, at the base of the leg is a swollen, pedicel-like region, which could conceivably be an oedematic swelling (explaining why it has the same markings as the body of the snake) and/or an accumulation of scar tissue resulting from healing of the hole in the snake's body wall that had been created when its victim kicked through it. Thirdly, the fact that the sole of the foot points forward is inconsistent with its being an atavistic limb of the snake but is wholly consistent with its being the foreleg of a prey victim that had been swallowed head-first, as is normal practice by snakes.

Incidentally, confirmed, comparable cases have been recorded from antelope-ingesting pythons whose victims' horns have pierced through their ophidian engulfers' gut and body wall.

Theory #4: There has been some online speculation as to whether such rupturing of the snake's body wall may actually have occurred only when the woman beat it to death (i.e. the leg was not present externally prior to this), and that her description of the snake as being legged beforehand was therefore mistaken or incorrectly reported. If this were correct, however, there would not be any presence of what appears to be scar tissue consistent with healing of the hole. Instead, all that would be present would be just a unhealed hole with the leg protruding directly through it and probably stained at its base with congealed blood that had leaked out through the hole. Yet no such blood is visible there in the photograph.

Obviously, an autopsy, or even a mere x-ray, of the snake's body would readily reveal whether its gut did indeed contain the body of a prey victim and also whether the mysterious leg belonged to that victim. Equally, if the leg was instead an appendage of the snake itself, an autopsy would expose this. So it is a great puzzle why the results of the autopsy – always assuming, of course, that one was ever conducted – seem never to have been publicly released. Riddles like this legged snake need a solution, and the solution needs to be aired, even it is as mundane as a snake whose engulfed prey victim proved to be not just alive but also kicking – and very emphatically so.  Otherwise they are destined to appear and reappear in the freak shows of cyberspace ad infinitum, not to mention ad nauseam.

China Snake
Opera News is a free to use platform and the views and opinions expressed herein are solely those of the author and do not represent, reflect or express the views of Opera News. Any/all written content and images displayed are provided by the blogger/author, appear herein as submitted by the blogger/author and are unedited by Opera News. Opera News does not consent to nor does it condone the posting of any content that violates the rights (including the copyrights) of any third party, nor content that may malign, inter alia, any religion, ethnic group, organization, gender, company, or individual. Opera News furthermore does not condone the use of our platform for the purposes encouraging/endorsing hate speech, violation of human rights and/or utterances of a defamatory nature. If the content contained herein violates any of your rights, including those of copyright, and/or violates any the above mentioned factors, you are requested to immediately notify us using via the following email address operanews-external(at)opera.com and/or report the article using the available reporting functionality built into our Platform 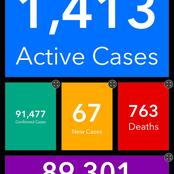 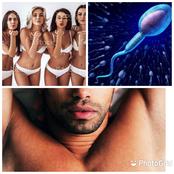 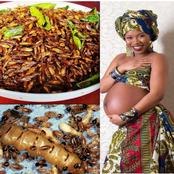 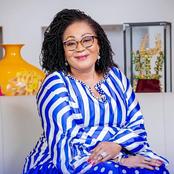 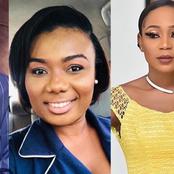 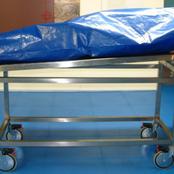 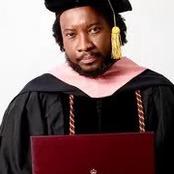 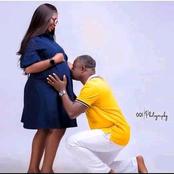 Advise From A Female Medical Doctor To All Women In 2021 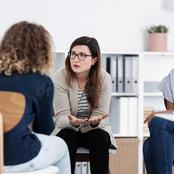