5 Most Poisonous Jellyfish In The World

By KkCabobo (self meida writer) | 14 days

5 Most Poisonous Jellyfish in the World 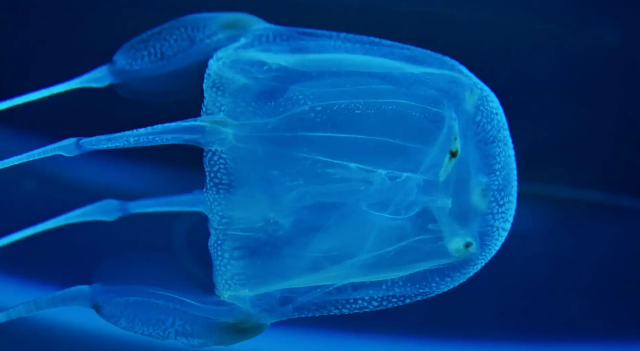 There are almost 200 known species of jellyfish drifting through our planet’s seas. While many of them are actually quite harmless, there are several species that have highly venomous stinging cells that can cause serious consequences for humans—such as extreme pain or even death.

The possibility of encountering some of the deadliest jellyfish in the world may be rare, but knowing that their out there should be enough to remind you to always wear exposure protection while snorkeling and SCUBA diving—even in warm water! Victims should always seek immediate medical treatment in the event of a sting to hopefully avoid the many severe health risks that these poisonous jellyfish pose to humans.

In stark contrast to other (occasionally) stinging but harmless species of jellyfish, the following are known to be extremely dangerous to humans. You’ll find that these jellyfish can be very difficult to spot given their transparent bodies, but it definitely helps to be aware of the places where they may frequent and, if possible, to avoid swimming in those waters altogether.

If you have no choice but to go near their natural habitats, make sure to have a jellyfish first aid kit (which should definitely include vinegar) on hand. Also, make arrangements for someone to take you in case you need to be immediately transported to the nearest hospital in the event of a sting.

And of course, make sure that you don’t pee on your sting. 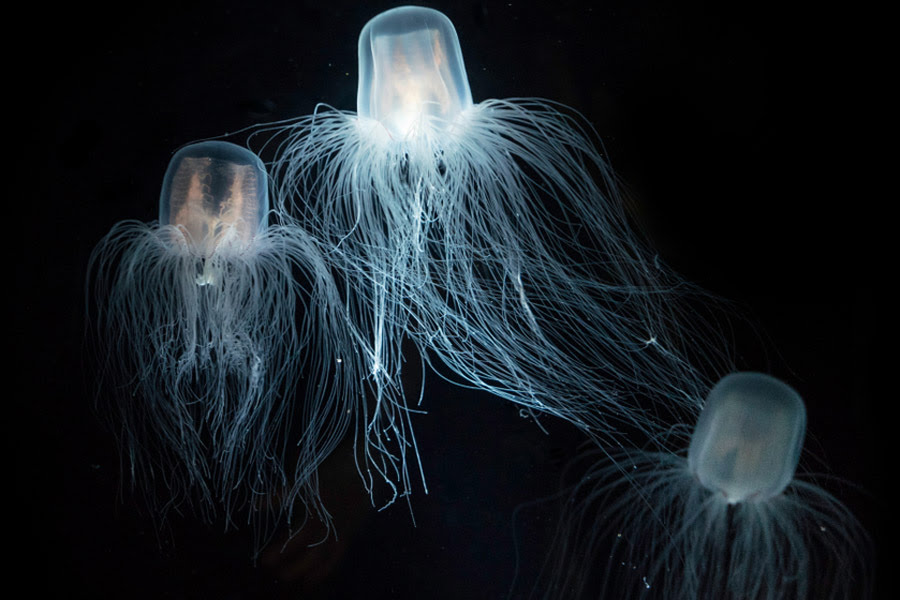 Chironex fleckeri, commonly known as a sea wasp, is one of the most dangerous jellyfish species not just because of its lethal poison—this large box jellyfish is nearly invisible, which makes them very hard to spot. They also prefer to hunt during the day and in shallow waters, making them more likely to come into contact with swimmers enjoying the beach.

The Chironex fleckeri’s venom is thought to be the strongest of any species of jellyfish as it has the ability to kill an adult man with a dose that weighs about as much as a single grain of salt. One sting can result in extreme pain and excruciating burning sensations; if left untreated, it can cause cardiac arrest and death.

Said to be the deadliest jellyfish in the world, around 63 human fatalities have been attributed to the sea wasp over the course of 80 years in Australia—and those are just the known cases.

You can tell a sea wasp or a similarly dangerous box jellyfish by its pale blue, transparent color and four-cornered, bell-shaped head. Each corner of its bell head can have up to 15 tentacles, which can grow up to 10 feet long. If you want to avoid them completely, this extremely poisonous jellyfish primarily lives in the coastal waters of Australia and New Guinea and throughout the Indo-Pacific.

This species of box jellyfish is a smaller version of the Chironex fleckeri. Despite its diminutive size, this jellyfish packs quite a wallop. They can usually be found in the waters of the Indo-Pacific and the Western Atlantic Oceans, and are known as “habu” in Japan’s Okinawa Prefecture, where encounters between people and this species occur annually.

The sting of the Chiropsalmus Quadrigatus is very painful and can be fatal in certain cases. Its sting can cause cardiac arrest, respiratory failure with acute pulmonary edema, or death. Distinguishing features include a hand-like appendage on all four sides of the bell and seven long, flat tentacles growing from each of these appendages.

Scientists believe that its unusual tentacles are more suited to catching fish rather than the crustaceans and other jellies that normally fall prey to round-tentacled species.

The tiny Irukandji is another jellyfish that does not play around when it comes to its venomous sting. Once believed to be found only in Australian waters, recent sightings have also been recorded in Florida, Japan, Thailand, and even in the British Isles—which has led to growing concern over the possible global spread of this fatally poisonous jellyfish.

Its small size—about the size of an adult fingernail—and nearly transparent body makes it an incredible threat to humans, who will in most cases feel the burn without ever having seen their attacker. A sting from the Irukandji produces what is known as Irukandji Syndrome, from which the victim will feel severe pain that can last for up to 12 hours; burning sensations on the skin; nausea and vomiting; excruciating stomach cramps, as well as muscle cramps in the legs and arms; serious cardiac problems; and a strange psychological symptom that causes the victim to experience feelings of impending doom, which makes them actually beg for death. “Patients believe they’re going to die and they’re so certain of it that they’ll actually beg their doctors to kill them just to get it over with,” said Australian biologist Lisa Gershwin during an ABC radio interview in 2007.

Nonetheless, being stung by an Irukandji is not an immediate death sentence. While it is without a doubt one of the most dangerous jellyfish species in the world, people typically survive the sting with swift and proper treatment—and plenty of pain medication.

Morbakka fenneri, known as the fire jellyfish for its potent sting, lives in the calm waterways and marinas off the coast of Queensland, preferring the warmer waters of the north. It is another species of box jellyfish and is a bit larger than the other jellyfish on this list, measuring roughly four inches in length with a two-inch bell diameter and a solid body with bright pink, wart-like protrusions on the top.

Their somewhat more visible size means that most people who get stung by the Morbakka fenneri can usually locate the source nearby. While the stings are indeed painful and have been associated with severe Irukandji Syndrome, they are not typically life-threatening.

Another type of box jellyfish that is also commonly referred to as a sea wasp is the Alatina alata. Formerly known as Carybdea alata, it is known for swarming off the coasts and bay areas of Hawaii and other parts of the Pacific, as well as along the beaches of Pakistan in the Arabian Sea. Its sting is mild compared to that of the other species discussed here, but some unpleasantness and discomfort should be be expected.

When stung by the Alatina alata, victims can typically spray the affected area with vinegar and apply hot or cold treatments that will reduce pain and swelling. However, due to its classification as a box jelly, Irukandji Syndrome could be triggered by the sting, so it is important to remain vigilant and seek immediate medical assistance when you are stung.

Thank you. Please kindly share and place your comments

5 Reasons Why People Die While Sleeping

Ghanaians Are Ungrateful To Nana Addo's Government With #Fixthecountry Demonstration