Luckiest people that survived the attacks of wild creatures

By [email protected] (self media writer) | 17 days ago

Wild marine creatures are simply are simply animals that lives in the ocean but are very wild. I know you understand what I mean by wild, they have the tendency to cause injury and even death to humans.

There are also certain marine creatures or animals in the ocean or sea that are super friendly so aren't dangerousand wild and such animals are dolphins, sea turtles, seabirds, pelicans, seagulls, herons, manatees etc

All these animals will not hurt anyone bit might harm some marine organisms as they are food to them. However, let's get started with the main reason why we came here. Well, as you are watching this man you will think he is performing stunts or probably skills with the elephant but it didn't end well. The elephant held his leg firmly and crashed his head on the ground multiple times.

Lucky for him, he didn't die but had minor injuries. 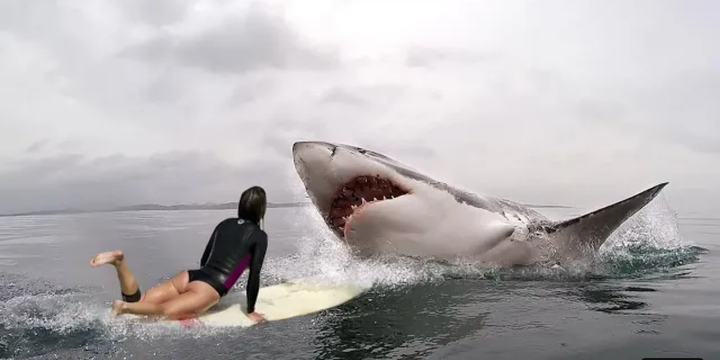 As for this one would call it a movie bit it is not, this woman was performing on the ocean and her friends were recording her, unfortunately for her a shark jumped out of the water and was aiming to bite her but she was lucky enough to dodge it and went to her friends safely. As for this man his was very bad, he was watching the bear when he unfortunately fell into its pen. He would have run to safety without any attacks because the bear was far from him but because he fell into it from great height he was feeling pains.

The bear sighted him and got hold of him biting him, it wounded him badly but he was lucky to survive as the zookeepers came to his rescue. This man experienced the worst day ever in his life, he jumped into the ocean and swam comfortably when his friends warned him that they've seen sharks coming from afar.

Now it was left for him to jump back into the boat but the sharks surrounded him. He was in the middle and they were about to attack him when luckily and fortunately for him the carcasses of a whale surfaced on the water pulling him on top.

Now he was sitting on it and the sharks couldn't attack him but kept on hovering around him. His friends brought the boat closer to him and he hopped in.

2021: Top 20 List of The Most Countries With External Debt And Highly Indebted African Countries

Top 5 Most Dangerous Bridges In The World In 2021

What will the Earth do if the Moon suddenly explodes?