Self-contained floating island is intended to help clean up our waters. 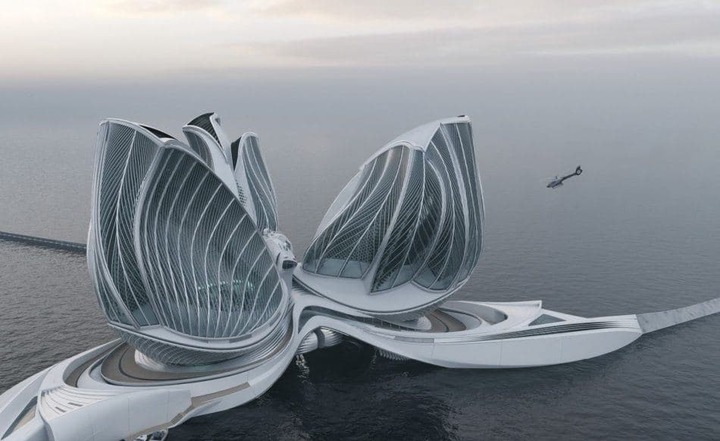 We're excited to tell you about the 8th continent, an award-winning design that recycles ocean garbage and is completely self-sustaining.

The five-part building was designed by Lenka Petráková, a senior designer at Zaha Hadid Architects in London, and includes everything from greenhouses and living quarters to biodegradable trash collectors and water desalination facilities.

The Great Pacific Garbage Patch, a 1.6 million square kilometer accumulation of marine garbage drifting in the Pacific Ocean, inspired the prototype ocean cleaning facility. "I realized how devastated the seas are, how many species are extinct, how much pollution there is, and that regions of the world that have never seen a human being suffer the repercussions of our activity," says Petráková.

When developing her concept, the designer was influenced by aquatic life. Petráková designed the floating station to be a "living creature that is totally self-sustaining" after examining how aquatic animals live and interact with one another and their surroundings. The goal was to create a concept that not only cleans our seas, but also restores their health. Following a competition organized by the Foundation for Jacques Rougerie, the idea was awarded the 2020 Grand Prix for its unique architectural design.

When operational, the station may remain moored to the sea floor while being mobile to move in accordance with ocean currents. The building will produce its own renewable electricity by harnessing the force of tidal waves to power its plastic collecting facilities and water desalination centers, maximizing the health of the marine ecosystem surrounding it.