8 Of The Biggest Babies In The Animal Kingdom

By KkCabobo (self meida writer) | 11 days

8 Of The Biggest Babies In The Animal Kingdom 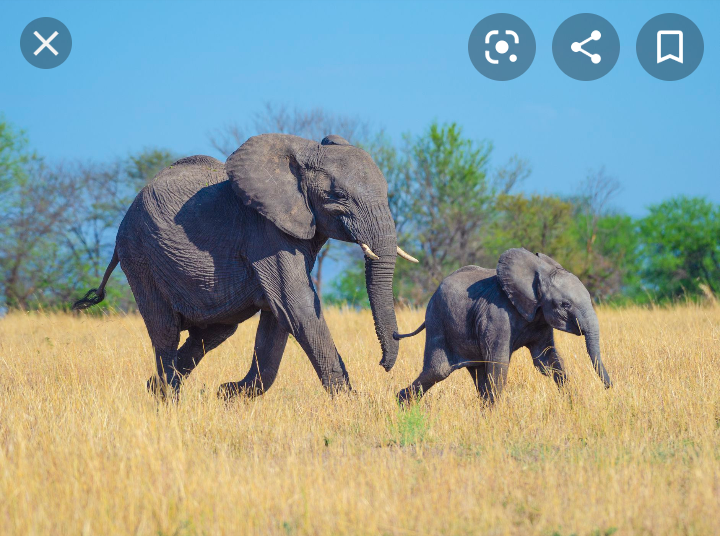 You might think the biggest bundles of joy that arrive in the animal world belong to the largest animals. And while that's true in some cases, it's not a universal rule. Kangaroos and giant pandas, for example, have tiny offspring. But some of the largest creatures, like the African elephant and the blue whale, give birth to some of the planet’s biggest babies. Giraffes make the list not because of their weight — babies weigh only about 110 to 120 pounds — but for their height. Adult giraffes can be 16 to 20 feet tall, and females give birth standing up. That means babies have a long way to fall (over six feet) when they are born.

The drop isn’t too bad for baby giraffe calves who are about six and half feet tall at birth. They are able to stand and walk within an hour of being born, and generally start suckling within 15 minutes. The hippopotamus is the second-largest land animal, with adults ranging from nine and a half to 16 and a half feet in length, and weighing up to 9,900 pounds. Their name comes from the Greek term for “river horse,” which is fitting because these excellent swimmers spend 16 hours a day in the water and can hold their breath for five minutes.

A female hippo typically has only one calf every two years and has a gestation period of nine to 11 months. They even give birth under water, meaning their 50- to 120-pound, 4-foot-long calves have to swim to the surface to take their first breath. Calves can nurse on land or underwater, and a couple of weeks after the birth, the mom and calf will rejoin the herd for protection. The average adult white rhinoceros is only slightly smaller than an average adult hippo, with some growing to 12 feet long and six feet tall and weighing 8,000 pounds. Every two and a half to three years, a female rhino will give birth to a calf after a gestation period of 17 to 18 months. When she gives birth, the baby rhinoceros will stand 2 feet tall and weigh up to 130 pounds.

A calf can stand up soon after birth and will begin to eat grass and vegetation after a couple of months, though it will continue to rely on its mother for nourishment for at least six months. Doting rhino mothers care for their calves for two and a half to three years before nudging them toward independence. Blue whales are the largest known animalsto have ever lived on Earth: Adults can measure up to 100 feet long and weigh 200 tons. So it's not surprising that when a baby blue whale is born, the calf itself is as big as some of the other largest animals on the planet.

While little information is available about the reproductive habits of blue whales, they are known to have a gestation period of approximately one year. At birth, baby blue whale calves are about 23 to 27 feet long and weigh approximately three tons. The calves eat nothing but mother's milk for the first seven to eight months and gain about 200 pounds per day. African elephants are the largest land animal in the world and they also have the longest gestation period of any mammal — around 22 months. When calves finally greet the world, they weigh between 200 and 300 pounds and are about 3 feet tall.

But don't let their size fool you. Elephant calves are completely dependent on their mothers. They nurse exclusively for the first four months, but continue to nurse for up to three years after weaning. Luckily, elephants live in a matriarchal society and mamas have lots of help from other female relatives, who all pitch in with child-rearing. Although kiwis chicks don’t come close to large mammal babies in size, they are notable for the size of their egg relative to the female’s body size (egg-to-body weight ratio). This flightless bird lays an egg that weighs about one pound, or 20 percent of its body mass; one of the largest of any bird (by ratio).

One advantage of this oversized egg is that it contains almost two-thirds yolk, allowing the chicks to hatch looking just like an adult with a full set of feathers, and providing enough sustenance for the chick to be independent immediately. Like giraffes, horses make this list for their height, not their weight. After a gestation period of about 11 months, a foal is born with legs that are almost as long as an adult's. In fact, their legs are so long, they may find it hard to reach the grass below to eat. Those long limbs combined with their smaller bodies weigh an average of 100 pounds, or approximately 10 percent of the weight of the mare. Foals reach their mature height quickly. By six months, colts are more than 80 percent of their mature height, and by two years of age they are almost the height of a fully grown horse, 58 to 63 inches.

Most foals are born at night because the darkness provides protection from predators. After just a few hours, a foal can stand and run alongside its mother. Feasting on her milk, it will gain three pounds a dayand will start eating solid foods after 10 days. While calves aren't huge, they're notable for two things they have in common with human babies. First, calves weigh about 7 percent of their mother's weight, which is roughly the same proportion as a baby human to its mother. The calf of a 1,300-pound heifer weighs around 100 pounds; similarly, a 140-pound woman might give birth to a nine-pound baby. Cows and humans also have similar gestational periods of about 280 days.

A calf will nurse from its mother for about six months. Cows are emotionally complex animals, and mothers and their babies have very close bonds. Females are also protective of their young and will chase away any threats.