By Abumuk7 (self media writer) | 6 months ago

Haitian-Japanese tennis superstar Naomi Osaka has launched her own line of Barbie dolls in line with her vision to empower women of color. 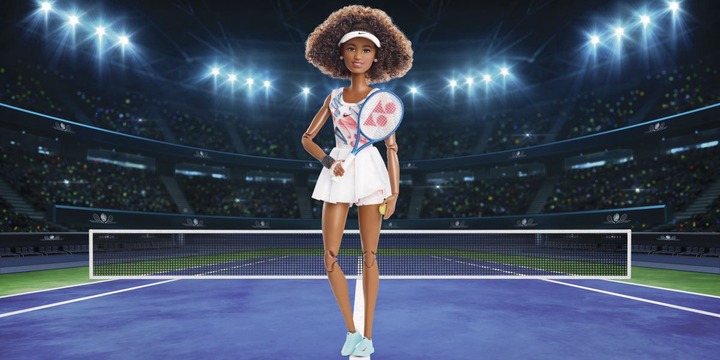 “It’s such an honor to be a part of the Barbie Role Model series and to remind young girls that they can make a difference in the world,” Osaka said in an official press release. “I want young girls everywhere to feel empowered to dream big and to know that if they believe in themselves that anything is possible!”

According to BET, the doll features the 2021 ESPYS Best Female Tennis Player of the Year wearing a Nike tennis dress with a brushstroke print in pink and blue. The design was reportedly inspired by her outfit at the Australian Open in 2020, according to Hypebae.

According to Yahoo news, the back of the box has a biography of the tennis star describing her as a “champion of change,” a photograph, and a quote from her saying you should not compare yourself with others because "the path that you're on is yours and yours only."

The doll is the second to be created for the tennis star. The first was created in 2019 as part of Mattel's 60th Anniversary collection.

Mattel's Global Head of Barbie & Dolls Lisa McKnight said that Osaka has "paved the way for future generations of girls to dream bigger. He adds that the tennis star has "shown the world the importance of being your own biggest champion through her unwavering courage and honesty."

According to BET, a new Netflix series chronicling the life of Naomi will premiere on the streaming platform on July 16th. The series reportedly offers glimpses into her journey to becoming a four-time grand slam champion and how she balances her fame and her mental health.

“I feel like the platform that I have right now is something that I used to take for granted, and for me, I feel like I should be using it for something,” the 23-year-old said in an official press release. “I believe, instead of following, you have to make your own path.”

The author first published the story on FACE2FACE AFRICA