By YunG_RicH_Jahmiel (self media writer) | 1 year ago 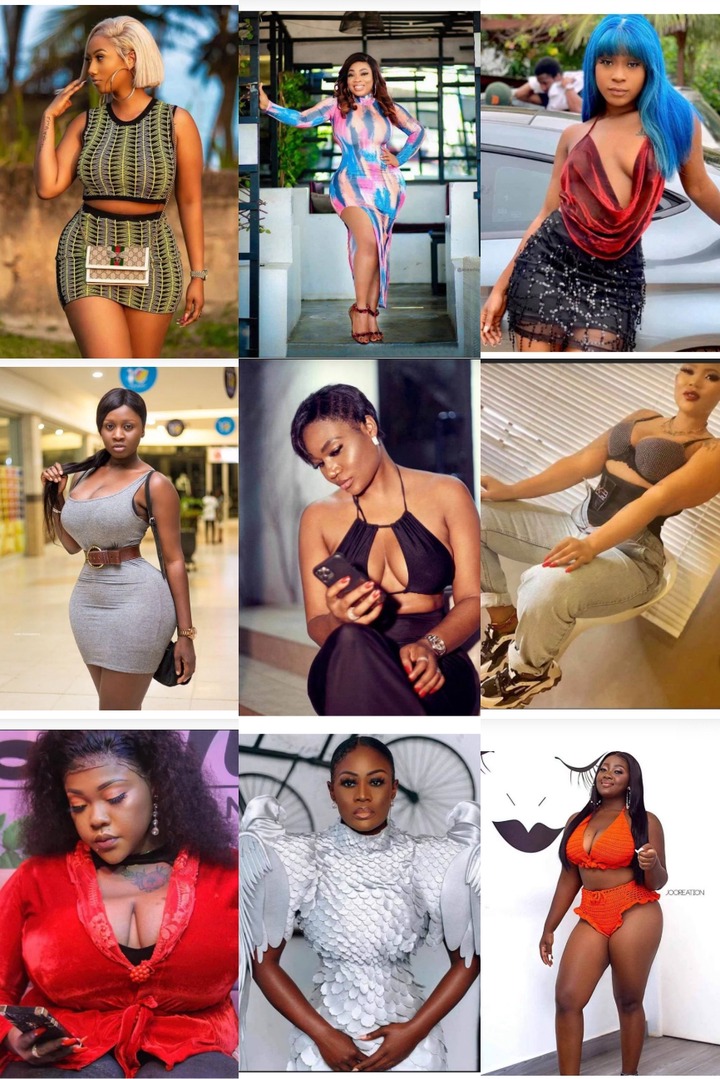 The term ‘Slay Queen’ has evolved over the years from having a respectable and classy meaning to a derogatory term in many parts of the world most especially in Ghana and Nigeria.

In a classy and original meaning of the phrase, it refers to a successful career woman and role model who has a great taste in a fashion that is well appreciated and respected by all.

But in modern slang, Slay Queen refers to a lady whose only priority is how she looks and how well her appearance can take center stage wherever she is. Modern Day Slay Queens go the extra mile to maintain their fake lifestyle; damn the opinions of others and its consequences.

Some people even believe most Slay Queens sleep with married, rich, and wealthy men in society to maintain their lavish and expensive lifestyle.

Since the term is used widely in Ghanaian circles, we have come up with 10 women in Ghana who are mostly referred to as Slay Queens. People believe they live like daughters of millionaires and some even depend on men to survive.

Her real birth name is Mona Faiz Montrage, who's popularly known as Hajia4Real. Hajia4Real has been in the game for longtime she can practically be described as grandmother when it comes to Slaying.She was in the slaying business with the likes of Confidence Haugen and others. While they are out of the game, Hajia4Real is still rocking and making waves.

Moesha Boduong was the first Slay Queen in Ghana to admit on TV that she sleeps with people's husbands for money and that is what helps her to maintain her lavish lifestyle.

Moesha Boduong is also the first Slay Queen from Ghana to admit she had her butt and boobs surgery to give herself the needed confidence to slay well. She claims to be working and that gives her an expensive lifestyle.

Although Andrea Owusu popularly known as Efia Odo knows the term Slay Queen and its implications, Efia has always admitted she loves being called a Slay Queen.

Although she tries to live lavishly and it’s believed she sleeps around.It has been said many times that she gets nothing from men even after they sleep with her. She is known to borrow to keep life rolling. Efia Odo is a strong member of the Ghana National Association of Slay Queens.

Princess Shyngle is not actually a Ghanaian. She is a Gambian but based in Ghana. She is more identified as a Ghanaian than a Gambian. According to rumours, this Slay Queen has removed some of her ribs just to have the hourglass figure she always wanted. Princess Shyngle now looks like the number 8. Some even believe she has no intestines and womb.Although she claims to be an actress and a photo model, we can easily count the number of movies she has starred in, and none of them is a top-class movie per the standard of Ghana. But she is living the dream.

This lady in question, Sandra Akobiah is one of the most popular celebrity lawyers in Ghana and the whole of Africa. Although a lawyer who has been called to the bar, Sandra Anlobiah is more of Slay Queen than a lawyer.

Recently, it was alleged she has had some work done on her butt and boobs when she miraculously woke up with some stunning body shape.

Gucci Mona has never hidden the fact that she is a Slay Queen and sleeps with big men for a living. She recently told Ola Micheal on Neat FM that they are a gang and veteran media personality Nana Aba Anamoah is their madam. Well, Nana Aba didn’t take it lightly with the accusation and threatened a lawsuit.

She has never shy away from the Slay Queen tag. Until recently that she joined Kantanka TV, it was practically unknown her source of income, We can only go by her own Slay Queen confession claims on live radio.

Shugatiti picked off from where Queen Facardi left. She is a nudist who is all over the place. As usual, Shugatiti is one of the leading members of the Ghana National Association of Slay Queens.

Rosemond Adade Brown has over the past 2 years become a very popular name in Ghana. She is nicknamed Akuapem Poloo and she is one of the most annoying famous personalities in the country. From going nude, recklessness, and desperate desire to be famous at all costs, Akuapem Poloo has got most people mocking her most of the time.Akuapem Poloo also claims to be an actress. But as usual, she is in the slaying business. Akuapem Poloo is a strong member of the Ghana National Association of Slay Queens.

Content created and supplied by: YunG_RicH_Jahmiel (via Opera News )