A look at how zapping the ‘penis’ could combat premature ejaculation

Doctors suggest that zapping the penis can help prevent premature ejaculation. One man who received the treatment was able to stay in bed for seven times longer. 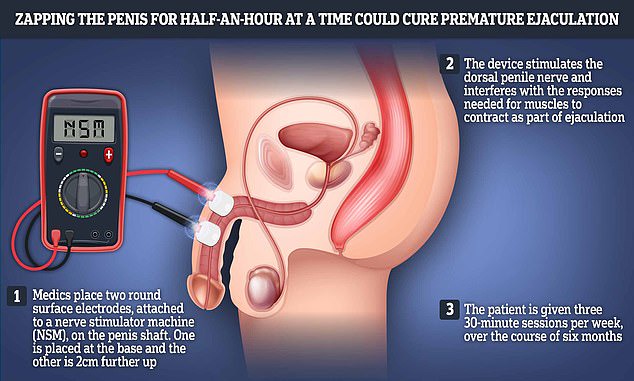 He received the treatment, which consisted of having electrodes placed on his penis for 30 minutes three times a week.

The anonymous male ejaculated within 40 seconds, according to doctors in Lebanon who treated him.

He was able to please his girlfriend for about five minutes before climaxing six months after finishing the treatment.

The Beirut doctors demanded more research to see if the device can be used as a drug-free, safe treatment for more people.

Urologists at Lebanese University described the example of a 28-year-old patient who had failed to respond to medicines.

Medics stated in the that the patient had been in a relationship with his partner for a year.

They had intercourse at least twice a week, and he would climax 'nearly every time' after only 40 seconds.

Dr. Mohamad Moussa and his colleagues experimented with passing electricity through his penis.

They thought it would stimulate his dorsal penile nerve, which collects information about movement and feeling from the penis.

WHAT IS THE FUNCTION OF THE DEVICE?

Two circular surface electrodes coupled to a nerve stimulator machine are placed on the penile shaft by doctors.

One is at the bottom, while the other is 2cm higher.

The gadget stimulates the dorsal penile nerve, interfering with the muscular contraction responses required for ejaculation.

Over the course of six months, the patient will receive three 30-minute sessions per week.

Two electrodes were implanted on the surface of the man's penis whenever he underwent zapping therapy.

He received three 30-minute sessions every week for six months, during which he was subjected to a continuous current.

Dapoxetine tablets, taken a few hours before intercourse, and lidocaine and prilocaine gels, which delay ejaculation, are two current treatments.