By Rasgambo1 (self meida writer) | 4 days

It looks like some Ghanaian Ministers and their ministries are beginning to lose it at this early stage of the Akufo Addo second term of office. Point of reference, is the ministry of Health, headed by Hon. Kweku Agyemang Manu.

The government of Ghana, through the ministry, has been reported to have gotten into a middleman transaction to purchase Covid-19 vaccines which has cost the nation more than the normal price. When all ears were waiting to hear the response from the ministry, a release came. But to everyone's surprise, the release only announced the coming of another release.

The allegation comes from a story, from the Norwegian tabloid Verdens Gang stated among other things; "The deal was allegedly ratified by Ghana’s Ministry of Health to acquire 3.4 million doses of the Sputnik V vaccines which is sold on the international market for $10 per dose but was sold to Ghana for $19 per dose by the two businessmen".

In an interview with the Verdens Gang reporter who worked on the story, Markus Tobiassen told Emmanuel Samani on TV3 Midday Live, the deal has the potential of enriching a few people at the expense of the Ghanaian public.

For a serious allegation coming from an international news agency, one would have thought that, there will be a swift and timely response by the ministry to the allegation which will put all interested citizens' emotions to rest.

But no. Funny and untidy enough, the ministry, under the hand of its head of public relations, only alerted the public of an impending explanation which was to come later. The release was to serve as a precursor.

"The ministry of Health wishes to inform the public that it will issue a release today in response to the allegation published in the said news story about its process of procuring the sputnik v vaccine for the nation" the statement said. 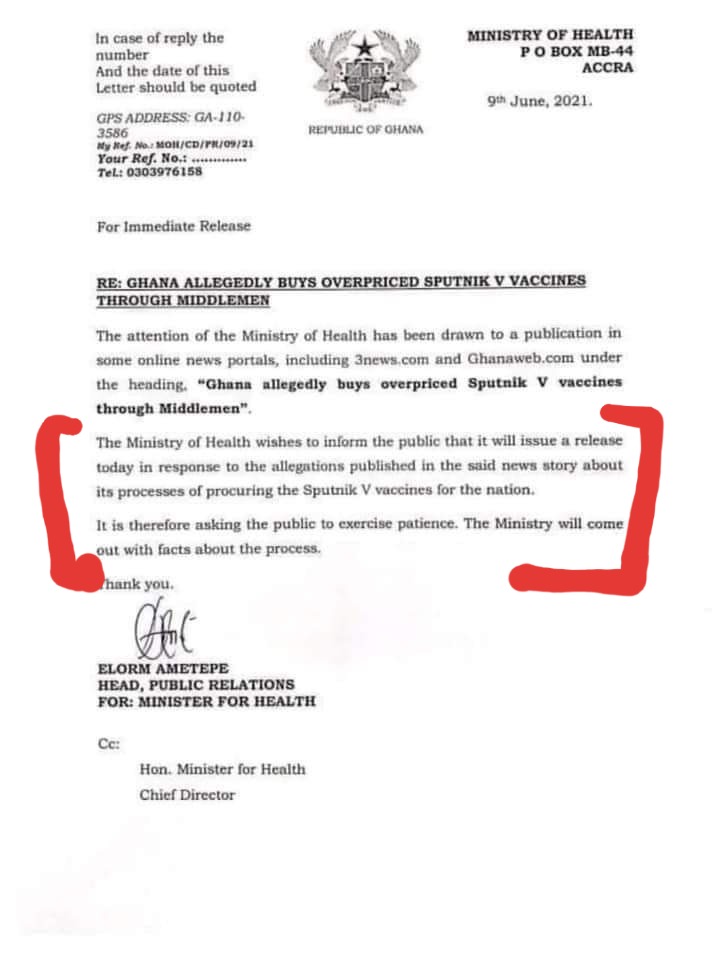 This has caused a stir on social media, with many left confused with this novel mode of announcement. Usually, the ministry comes out to either deny or refute such allegations and goes ahead to explain the matter, or the minister might organise a press conference to state the records straight.

Many ask why would you waste time and space to come out, only to announce the coming of an announcement?

This has left come thinking that, probably, the ministry has something to hide.