By GanyoEdem (self media writer) | 1 month ago 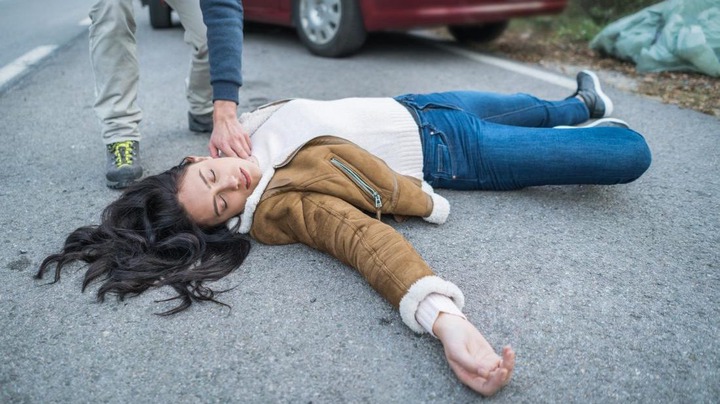 If you find an unconscious person, try to determine what caused the loss of consciousness. Check to see if he/she is wearing a medical alert tag.

If you do not think there is a spinal injury, put the person in the recovery position:

Position the person lying face up.

Turn the person's face toward you.

Take the person's arm that is closest to you, and place it to his/her side, tucking it under the buttock.

Take the person's other arm, and place it across his/her chest.

Cross the person's ankles by placing his/her far leg over the near leg.

Supporting the person's head with one hand, pull his/her clothing at the hip, rolling toward you. The person will be on his/her stomach, facing you.

Bend one arm up and one arm down, to support the upper and lower body.

Tilt the person's head back to allow air to move freely in and out of the mouth.

If you do think there is a possible spinal injury, leave the person as you found him/her (as long as breathing continues). If the person vomits or bleeds out of his/her mouth, roll his/her entire body at one time to the side. Be sure to support the person's neck and back to keep the head and body in the same position while you roll him/her.

Note: If the person awakens during the above self-care measures and he/she becomes restless or agitated, attempt to gently restrain him/her.

The following should be avoided in the case of loss of consciousness:

Do not give an unconscious person anything by mouth; even if he/she regains consciousness, do not give anything until consulting a physician.

Do not attempt to wake an unconscious person by slapping or shaking him/her or by putting cold water on the person.

Do not put a pillow under the head of an unconscious person, as this could block his/her airway.

Diabetes affects blood sugar, and too much sugar (hyperglycemia) and too little sugar (hypoglycemia) can lead to unconsciousness in the form of diabetic coma or insulin shock, respectively.

Substance abuse and alcohol abuse, straining during bowel movement, coughing hard, and breathing quickly (hyperventilating) may all cause unconsciousness.

A person who is unconscious may be:

1. Drowsy and/or disoriented; he/she may come in and out of consciousness.

3. In a coma; he/she may be completely motionless.

I took care my wife and stepchildren for 25yrs, now they’ve abandoned me re-unite with their father