By NewsHawkersGH (self meida writer) | 5 days

Located at the heart of the Tarikpa, a farming community, 15 kilometers West of Savelugu the Capital of the Savelugu Municipality of the Northern Region, Tarikpaa Community-based Health Planning and Services (CHPs compound) looks dilapidated, outmoded and abandoned.

Built over 20 years, the structure serving as the community’s health facility, has not seen any renovation or facelift since its establishment. The dilapidated structure according to the people of the community originally, served as teachers’ quarters but was converted into a CHPs compound in 2012 after the Ghana Education Service built a new teachers’ quarters for teachers of the Tarikpa M/A Junior High School. The Tarikpaa dilapidated CHPs compound serves an estimated population of about 6,000 people in four communities. The communities include; Tarikpaa, Yizegu, Yilikpani all in the Savelugu Municipality and Yipelgu in the neighboring Kumbungu district. The struggle to access quality but affordable care services

Mr. Mahama Wumbei, the Assembly Member for the Tarikpaa Electoral area, said the community and its environs is the struggle pregnant women had to go through during labour and the entire duration of the pregnancy.

“It negatively affects our lives, especially our woman. Our women have to be transported to Savelugu to be delivered of their babies and some of them unfortunately have to give birth while on their way to the nearest health facility. And this is very bad because it affects the health of the baby and that of the mother. A woman here, a couple of years back lost her baby as she gave birth on the way to the hospital. There have been instances where motor bikes conveying pregnant to the health facility for delivery were taken away by armed robbers leaving the vulnerable pregnant women to their fates. To the women in Tarikpaa the absence of a proper health facility in the community is denying them of a right to access to quality health care. Nma Aishetu Peter, a mother of two who is six months pregnant narrating her ordeal said pregnant women in the community go through a lot of stress during labour to access basic health care services. She said they become psychologically and emotionally traumatized when they get to the eighth month of their pregnancies.

”My heart beats when my pregnancy grows old. This is because there are no health facilities here that we can access to deliver our babies. If your husband does not own a motorbike, then, your situation is worse. Unfortunately, vehicles do not regularly ply this road unless on market days and the absence of a decent health facility is really affecting us” she noted.

Fatimata Abubakari who narrated her ordeal of an armed robbery incident said: “I was pregnant with my first boy and when I was in labour and was being transported on a motorbike by my husband to the Moglaa health center; we were stopped by armed robbers on the way and unfortunately, they robbed my husband of his motorbike. They actually saw me in pain but they refused to listen to our plea and robbed us of the bike as well as other valuables. At least, if Tarikpaa had a health facility, this nasty situation could have been avoided. This is why we need a functional health facility in our community”. The worry of the Chief of Tarikpaa

Worried over the trauma and challenges his subjects are going through, the Chief of Tarikpaa, Naa Dahimani Karim, has started a self-help initiative to construct a modern Community-based Health Planning and Services. According to him, his subjects on regular basis come to his palace with the complaints of the dilapidated health facility and how it is affecting the health of the pregnant women in the area. “With no help coming from anywhere, I have galvanised my people for us to look for resources to start the project. You know our situation, we are just peasant farmers and it is difficult raising funds to complete the project. Some individuals have supported us but the support is not enough to complete the building. As you can see, the building is roofed and is left with plastering of the walls and the floor. After that, we will need furniture and medical equipment to stock it to become operational. So, this is where we are”, he lamented.

The Savelugu Municipal Health Directorate of the Ghana Health Service said they were helpless over the situation but were collaborating with the Savelugu Municipal Assembly to support the community to complete the CHPs compound. Madam Diana Agong said, her attention had been drawn to the situation in Tarikpaa, but the directorate could not readily support to complete the Tarikpaa community self-help initiative of putting up the health facility. “We don’t have the capacity to build the health facility for them but the Assembly has promised to help in this regard and we are hoping this is fixed soon”. 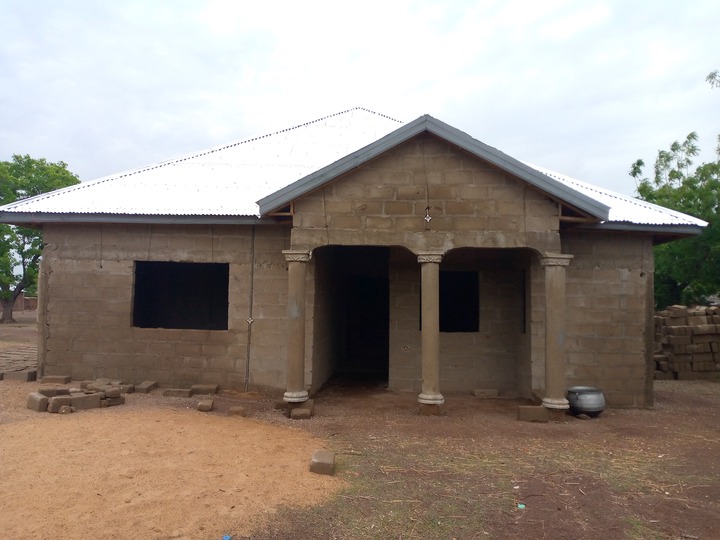 Mr. Wumbei, the Assembly Member for the Tarikpaa Electoral Area, confirmed that the Savelugu Municipal Assembly has agreed to support the community to complete the new facility. He, however, said the Assembly is relying on its share of the District Assembly Common Fund (DACF) which is provided by the central government to Assemblies to carry out their developmental projects. He explained that in October 2020, the Assembly made the pledge to support them, but the disbursement of the DACF has been in arrears delaying the completion of the project. “Last year, the Municipal Chief Executive, Hajia Ayishatu Seidu, confirmed to me that, they will help us complete and furnish the building. But since October 2020, the Assembly has not received its share of the Common Fund making it difficult for us to complete the project.

He noted that in the absence of the Assembly Common Fund, they can barely support the community to complete the CHPs compound.

The over 6,000 popualtion of Tarikpaa, Yizegu , Tirekpani and Yipelgu communities are passionately appealing to benevolent individuals, non-governmental organizations and philanthropists to help them complete their self-initiated CHPs compound. Until then, the pregnant women in the Tarikpaa and surrounding communities will continue to suffer in accessing quality health care.

If the residences of Tarikpaa are provided the a modern health facility, maternal and neo-natal deaths would be reduced and even prevented.

Suspected robbers kill a police officer, an eyewitness and injure a bullion van driver at Korle-bu