Another Pandemic Stirring: Everything About The New Monkeypox Disease

By Discoverers_Gh (self media writer) | 7 months ago

Ghana has recorded 5 confirmed cases of another viral disease called Monkeypox in three administrative regions including Eastern, Greater Accra and Western Regions, although the are 12 suspected cases of the viral virus have been investigated since May 24, 2022 by the Ghana Health Service. What is this new development? Anything to be cautious about? Yes, there is, therefore take time to read this article carefully.

A brief history of Monkeypox

Monkeypox was first discovered in 1958 when two outbreaks of a pox-like disease occurred in colonies of monkeys kept for research, hence the name ‘monkeypox.’ The first human case of monkeypox was recorded in 1970 in the Democratic Republic of the Congo (DRC) during a period of intensified effort to eliminate smallpox.

Monkeypox cases in people have occurred outside of Africa linked to international travel or imported animals, including cases in the United States, as well as Israel, Singapore, and the United Kingdom.

The natural reservoir of monkeypox remains unknown. However, African rodents and non-human primates (like monkeys) may harbor the virus and infect people.

The following symptoms characterize someone who contracts the Monkeypox disease. However, note that not all skin rashes are considered Monkeypox and therefore diagnosis must be done to confirm the disease by all means.

4. Muscle and back aches

Monkeypox Transmission (How it is transmitted) 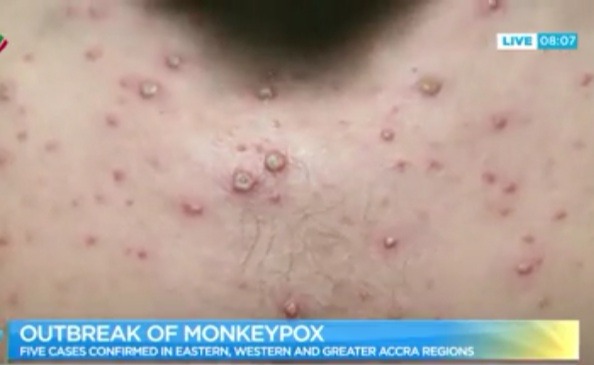 Monkeypox virus can spread when a person comes into contact with the virus from an infected animal, infected person, or materials contaminated with the virus. The virus can also cross the placenta from the mother to her fetus.

Monkeypox spreads between people primarily through direct contact with infectious sores, scabs, or body fluids. It also can be spread by respiratory secretions during prolonged, face-to-face contact. Monkeypox can spread during intimate contact between people, including during sex, as well as activities like kissing, cuddling, or touching parts of the body with monkeypox sores. At this time, it is not known if monkeypox can spread through semen or vaginal fluids.

It is also not yet known what animal maintains the virus in nature, although African rodents are suspected to play a part in monkeypox transmission to people How to Prevent Monkeypox

There are number of measures that can be taken to prevent infection with monkeypox virus:

1. Avoid contact with animals that could harbor the virus (including animals that are sick or that have been found dead in areas where monkeypox occurs).

3. Isolate infected patients from others who could be at risk for infection.

4. Practice good hand hygiene after contact with infected animals or humans. For example, washing your hands with soap and water or using an alcohol-based hand sanitizer.

5. Use personal protective equipment (PPE) when caring for patients.

There is no known cure for Monkeypox. However, a research conducted by Pharmacist and Research Fellow at the Centre for Democratic Development (CDD-Ghana), Kwame, Sarpong Asiedu, reveals that the smallpox vaccine is also effective against the Monkeypox disease.