Latest health news over the world

1.Brazil has been hit hard by Covid, and many people are looking for help. Dr. Albert Dickson, an ophthalmologist in Brazil's northeast region, offers prospective patients "free medical consultations" as well as prescribing "prophylactic measures" against the virus.

"How are you going to be entitled to the consultation? You will subscribe to our channel... You will make a screenshot and send it to my WhatsApp. When you send it, you will start to have access," he said in a video published on Facebook in March.

"The secret is to send the screenshot."

In addition to being an ophthalmologist, Dr. Dickson is a Brazilian state representative from the minor Pros party, which supports President Jair Bolsonaro.

In his consultations, he prescribes drugs such as ivermectin. That's a treatment for lice and scabies which he and others say prevents Covid - but according to several leading health authorities, there's no evidence to back up those claims.

BBC News Brasil interviewed a number of patients who contacted Dr. Dickson on WhatsApp, and each confirmed they received a stock response reiterating the process and encouraging them to follow him on Instagram.

We contacted Dr. Dickson via email. He says he "suggests" signing up for his Instagram and YouTube channels because he puts "up-to-date research there and explains the disease in detail and our experience with it, in addition to answering questions live".

"It is not mandatory to subscribe to the channel to get a consultation," he says. "We just suggest it. Many don't comply and we continue to respond. The virtual consultation is free, I have never charged."

A charismatic anti-vaccination campaigner has gained popularity by claiming that medical science's approach to the pandemic is entirely wrong. But critics say Biswaroop Roy Chowdhury is endangering lives by falsely claiming he can cure Covid-19 through diet alone, report Ed Main and Reha Kansara.

Biswaroop Roy Chowdhury is not one to hold back.

"According to me, most deaths are not because of coronavirus itself but because of its treatment," he says in one video on his website.

The Indian social media star - or former social media star, now that he's banned on several platforms - asserts that conventional medicine is a conspiracy designed to line the pockets of doctors and big business.

France is one of the most vaccine-skeptical countries in the world - fertile ground for hard-line anti-vaccine activists spreading online misinformation writes the BBC's specialist disinformation reporter Marianna Spring.

He also helps run a conspiracy-themed French-language Facebook group with 50,000 members, many of whom spread falsehoods about coronavirus.

He became a member just after the start of the pandemic, almost a year ago.

"I felt in my gut that this whole thing was overrated and wrong," Gilles says. He doesn't deny - like some others in the group - that Covid-19 is real. Instead, he harbors vague suspicions about the disease, potential cures, and alleged cover-ups.

And he doesn't want a Covid vaccine, because of posts he's seeing on the group. 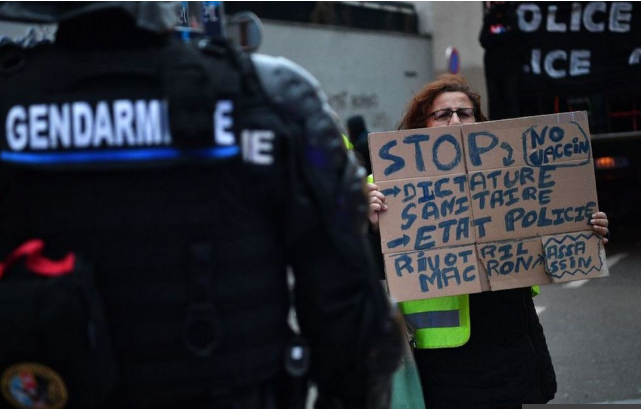 (Video)- Happy moment Kwame Yogot storms a shop and jams to his hit song with his fans.