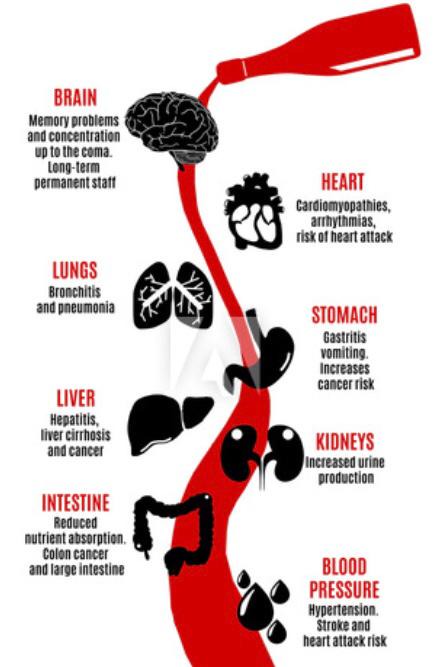 (1) Alcohol is produced by fermentation , and obtained by distillation .It will burn like Kerosene oil and other burning fluids.

(2) The vapor of alcohol will burn and will sometimes explode .

(5) Alcohol is the result of a sort of decay , and much food is destroyed in producing it.

(6) Besides ordinary alcohol, there are several other kinds .Naphtha and fusel- oil are alcohols .

(8) Cider , Beer , and Wine are harmful and dangerous as well as strong liquors ." "Bitters " often contain as much alcohol as the strongest liquors , and sometimes more .

(9) Alcoholic liquors are sometimes ADULTERATED , but they usually contain no poison worse than alcohol.Pure alcohol is scarcely less dangerous than that which is adulterated .

(11) Alcohol will kill grass and other plants , if poured upon them or about their roots .

(14) Alcohol causes the body to lose so rapidly that it becomes cooler instead of warmer .

(15) the danger of freezing to death when exposed to extreme cold is greatly increased by taking alcohol.

(16) Stanley , and other African explorers , say that it is dangerous to use alcoholic drinks in hot climates .

(17) In very hot weather , persons who use alcoholic drinks are more subject to sunstroke than those who do not .

(18) Beefsteak soaked in alcohol becomes tough like leather .An egg placed in alcohol is hardened as though it had been boiled .

(19) the effect of alcohol upon the brain , nerves , and other tissues of the body is much the same as upon the beefsteak and the egg mentioned above

(3) How can we prove that there is alcohol in wine , beer , cider and other fermented drinks ?

(8) Can plants be made drunk by alcohol? Describe the experiment which proves this ?

(9) What has Dr.Riberts proven concerning the influence of alcohol upon digestion ?

Thanks to Dr.JH .Kelling on his book First Handbook On Physiology and Hygiene..

Am brother Friday (The Bible Worker )