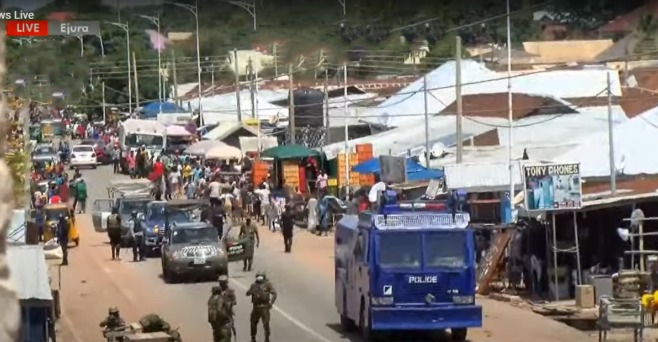 The General Officer Commander of the Central Command, Brigadier General Joseph Aphour has taken his turn to the fact-finding committee set to probe into the killing of two young men at Ejura in the Ashanti Region of Ghana. In his account, the commander indicated that the protesting civilians started firing gunshots at his men deployed to ensure calm in the community and they had no other option than to fire back.

More information has been unfolding since the committee began sitting in Kumasi. Accounts after accounts show that the angry protesters were hostile towards the military officers deployed in the area and that triggered the gunshots. It is also emerging that gunshots were coming from the protesters and that caused the military to retaliate.

Following this, the security officers mounted searches from the homes of the community members and that has led to the retrieval of some weapons. It is unknown if the same weapons were used by the protesters to fire at the military but official investigations have begun. For now, two persons have been picked up by the police after weapons were seen from their homes. The names of these persons were not provided to the committee neither was it confirmed that the weapons were registered or not. “What I have heard from my commander is that at this particular moment, two persons have been arrested with weapons and they are with the police”. Brigadier General Joseph Aphour told the committee. The kind of weapons retrieved was however not told.

There will be a lot of consequences if investigations reveal that the same weapons were used to shoot at the security officers. Those arrested for the possession of weapons will be made to assist the police in investigations. The other side of the issue is that Ejura has a larger population and it is likely that some residents might have weapons for personal protection. Either they are registered or not is a topic for discussion on another day.

It has also emerged that whenever the military is invited to support the police, they have to take the lead in the attack and if dialogue does not work, gunshots can be fired. This explains why the military was leading the police officers at Ejura on the day of the incident. They were also scared that the protestors were likely to fire a direct shot at an officer and that was prevented.