Well, this is the story of Yaa Peprah.

Yaa Peprah is a farmer with a cocoa farm. She met her husband Mr. Agyekum and had 3 children. Yaa Peprah is also a businesswoman. She traveled to Côte d'Ivoire and left her farm to her husband to take care of. When she returned, her husband expanded the farm. However, there was a problem. Her husband refused to give her the farm. After several months of disagreement, the matter was finally referred to the traditional rulers in that village. Despite the intervention, Mr. Agyekum refused to comply with the conditions set by the chief.

The case eventually went to court. The court ruled that because she had 3 children, the farm had to be divided into three parts. One part falls on the man, the other on the woman, while the other part is used for child care. Mr. Agyekum took the part for the children and sacked them, this brought another misunderstandings that they were not entitled to.

Yaa Peprah decided to confront him on the farm and the case worsened. she was beaten by Mr. Agyekum ruthless and suffered many injuries to her body. In Yaa Peprah's revenge, Mr. Agyekum on his way out of the field and hit him at the back of the head with a stick. He fell at the spot. She realized he could have been hit hard when she saw bloodstains on the stick she used.

She hurried to inform her brother of the incident. The two quickly reported the incident to police, the went to the scene to find Mr. Agyekum in the blood. When he was taken to the hospital, Mr. Agyekum died on the way.

This was the beginning of Yaa Peprah's woes. 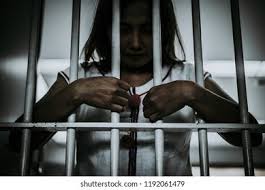 For example, if judges were given the opportunity to consider specific circumstances that lead to loss of life, many could be charged with crimes such as homicide on death penalty.

However, this is not the case in Ghana, as the Criminal and Other Crimes Act 1960 (Law 29) prescribes the mandatory death penalty for certain crimes and prohibits judges from assessing specific circumstances that may have consequences.

Many more people who have similar stories are dying in Ghana. The story of Yaa Peprah is a clear case of the gender-based violence she suffered at the hands of her husband, Mr. Agyekum. Although the circumstances leading to her husband's death can be attributed to a predetermined plot to harm her, it was not her intention to kill him. The fact that the incident was immediately reported to the police and the man died while being taken to the hospital was enough to turn the judge's sentence into life imprisonment or punishments other than the death penalty.

Check out some photos of daughters of Fella Makafui, Kelvin boy and Strong man.