My Lord, I'm a mentally unstable person - Funny Face begs for mercy at the Court

Born Benson Nana Yaw Oduro Boateng, the popular entertainment figure after swearing, raining insults on some persons was captured by the Police Service and arraigned before the Kaneshie District Court yesterday for threatening to take the lives of some individuals.

In the process when his case was opened, he told told the Court that he has not in the right frame of mind for a while now, adding that a friend gave him a toffee suspected to contain doses of Indian hemp, popularly known in the local parlance as "Wee" and has in a way affected his actions and thoughts lately. 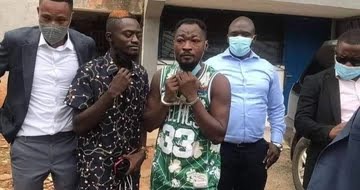 He told His Worship, Kofi Oheneba-Kuffuor in Court today that, the toffw he took caused him to speak and act in the manner which he did.

He says he is not legally represented by any counsel because he caused this brouhaha and wants to fight his battle after failing to take his drugs as prescribed by his doctor. He says he is deeply depressed after his kids were taken from him by his girlfriend, Vanessa.

The Judge therefore referred him to the Accra Psychiatric Hospital for his mental health to be checked before coming back to the law Court.

The Comic Actor turned Musician based on his words needs his children, and the lady who bears the children to be around him and in so doing, he is likely to gain 'consciousness'.

Lilwin, one of the people he had already insulted and threatened to beat was later seen taking a picture with him after Court proceedings when he was being escorted outside the yard with some State security officials.