Frustration has grown in recent months as Ghanaians bear the brunt of rampant inflation amid government efforts to redress the economy. 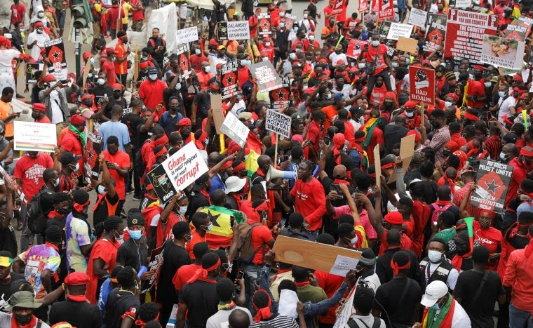 Disappointment has increased in recent months as Ghanaians have borne the brunt of rampant inflation amid the government's efforts to rebuild the economy.

Crowds of protesters surge through the streets of Accra

Protesters march through the streets of Accra on August 4, 2021 during the #fixthecountry protest in Accra, Ghana.

Demonstrators in the Ghanaian capital rallied for a second day of protests against rising inflation and other economic woes after the first day ended with clashes with police and 29 arrests.

Hundreds of people took to the streets on Tuesday to condemn rising prices, e-payment taxes and other levies amid an economic downturn.

Police used tear gas and water cannon to disperse the permitted march, according to a statement, after protesters demonstrated violence and injured a dozen officers.

They arrested 29 protesters on charges of "attacking and damaging public property" and reviewing event footage to identify other participants.

Sami Gamfi, a senior member of the local lobby group Arise Ghana, which organized the protests, told Reuters that police had agreed to provide security for the second day of demonstrations.

Police did not immediately respond to a request for comment.

Ghana, one of West Africa's largest economies and the continent's second largest gold producer, experienced slow growth to 3.3% year-on-year in the first quarter of 2022, with inflation hitting a record 27.6% in May.

Disappointment has increased in recent months as Ghanaians have borne the brunt of rampant inflation amid the government's efforts to rebuild the economy, appreciate the local currency and avoid a debt crisis.

The tax on electronic payments, approved in April and presented as a solution to Ghana's financial problems, has been very poorly received, with critics saying it unfairly affects low-income people and small business owners.

Last August, residents also took to the streets to protest, demanding accountability and good governance. The protests spread on social media with the hashtag #fixthecountry, which was again used for demonstrations this week.