Residents of Eshiem, a suburb in the Sekondi Takoradi Metropolis of the Western Region have embarked on a serious demonstration to register their anger over the poor nature of roads in the area.

The angry residents blocked the main road from Mpintsin junction to Eshiem amidst the burning of car tyres in the middle of the road.

According to them, the heavy trucks conveying sand from a company in the area have contributed to the road developing huge potholes.

They have pledged to continue demonstrating until their roads are fixed. Trucks could be seen stranded in the middle of the road with other road users finding it difficult to get to their destinations.

The residents complained that the poor nature of the road is causing severe dust in their rooms and most people have as a result contracted respiratory diseases.

“We agree with the demonstration because we are human beings, our children ply this road to school. The dust is killing us. We are in red this morning and will not stop until the road is fixed. Whenever it rains, the issue becomes worse. Go to our rooms and see how the dust is killing us. When the trucks get here, they drive on top speed and that is causing us a lot of health problems”. Ohenewa Rita, a female who was part of the demonstration intimated.

On his part, an opinion leader in the community Mr. Kofi Badu indicated that they have written several letters for the road to be fixed but authorities have refused to respond to them. He expressed regret and indicated that nobody can convince them to stop the demonstration. 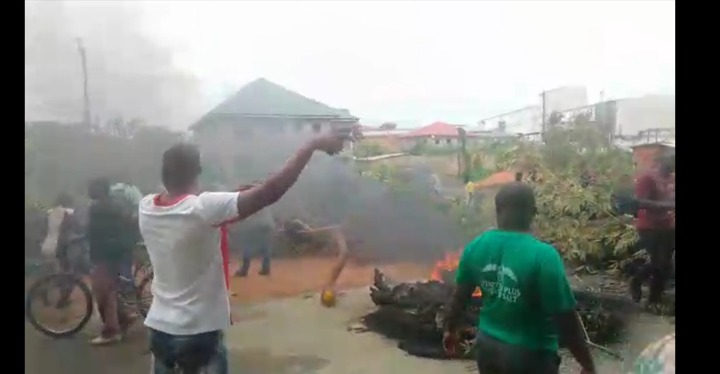 “From where we are standing to the Gas filling station and the tiles company, they all ply this road almost every day with their trucks. We have written them several letters for them to fix the road. They told us the road will be constructed at the end of last year but up till now, nothing has been done. Until they bring us machines to fix this road, we will never stop this demonstration. Every access road has also been blocked. We will not listen to anyone until the road is fixed”. He indicated.

I Was Once A Labourer. We Started Sakumono Estate - CEO Of McDan Group Of Companies

GES Promotions: Pass Mark depend on the quota of what the government can afford to pay?