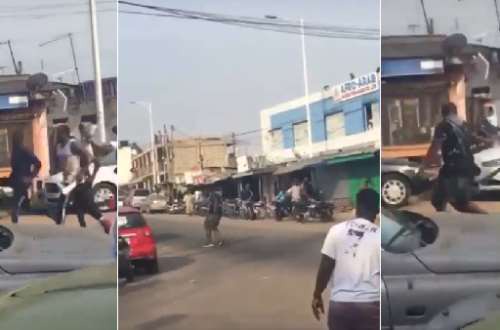 All seven suspects who were arrested by the Police in connection with the violence in Nima, Accra earlier this week have pleaded not guilty to the charges against them.

On Tuesday, a clash between two gangs in Nima resulted in gun shots that left several people injured.

Subsequently, after the Police took charge of matters, some seven individuals were arrested for their alleged involvement in the clash that left residents fearing for their lives.

Appearing before a Circuit Court today, Friday, January 21, 2022, all seven suspects have pleaded not guilty to the charges filed against them.

The suspects include Abdul Gafaru Mahama (A3), Atarouwa Bassam, (A6), Abdul Mumuni Gariba, (A7), and Mohammed Saabi Barinu alias Namer.

Lawyers of the suspects argued that their clients were good people who found themselves in wrong places at the wrong time.

Although a plea for bail was made to the Court, the Prosecution led by Chief Inspector Dennis Terkpetey opposed the bail and argued that there is so much tension in town which ought to be managed properly.

Having listened to both parties, Her Honour Mrs. Rosemond Baah Torsu who presided over the case rejected the plea for bail.

She charged the Prosecution to investigate the issues of Alibi presented by the suspects and report back to Court.

The case has been adjourned to February 1, 2022, with all seven suspects remanded into Police custody.