By ghtrendingnews (self meida writer) | 1 months

It was a very sad news that military men shot gun fire into a crowd of protesters which are citizens of Ejura which led to the dead of two and injury of some of this protesters.

The news was that the protesters were protesting about the dead of a particular man in Ejura who was killed by unknown people. This man goes by the name Ibrahim Mohamed popularly known as Macho Kaaka. 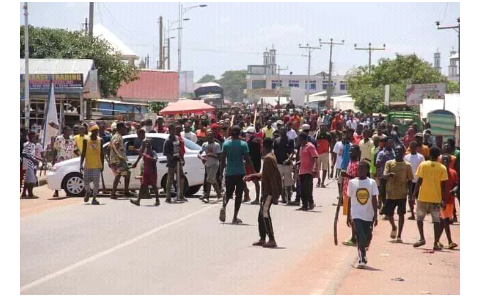 The Ashanti Regional Police Command has declared that the military men shot the gun because the protesters were attacking them with stones, machete and bottles that's why they decide to defender themselves which led to the gun short.

This incident happened because of the rude activities of the citizens, if they were to go back and stopped the protest when the military men has arrived all this dead incident will not happened.

In the picture above you can see a military man that bend down and pointed the gun into the crowd. It was at that moment the gun short was fire, which led to the dead and the enjury of some of the citizens.

Content created and supplied by: ghtrendingnews (via Opera News )

After the FixTheCountry Demonstration, what next?