Myanmar Nun Fell To Her Knees In Prayer At A Protest Against The Coup; See What The Police Did.

By GlitteratiNews (self meida writer) | 1 months 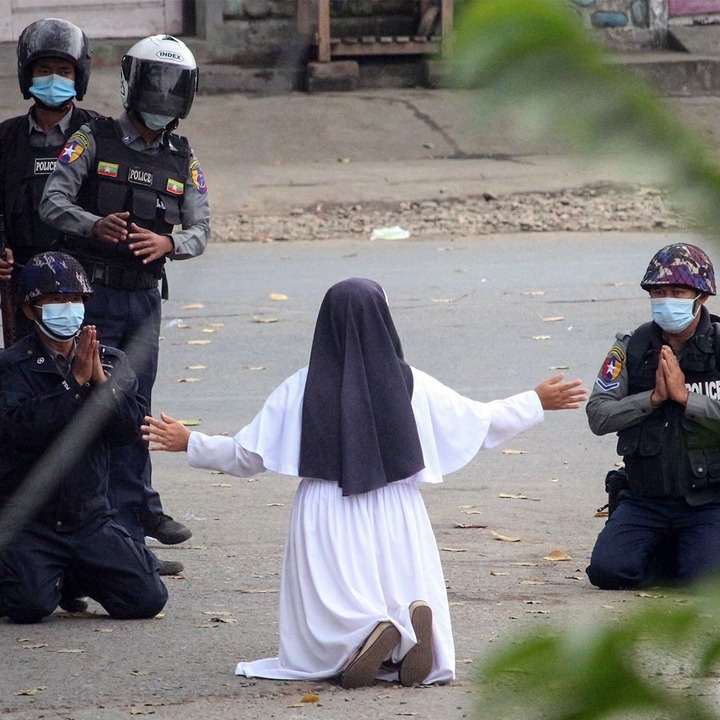 This is the story behind Myanmar's most famous protest photo.

When a Myanmar nun fell to her knees at a protest against the coup, pleading with police who then joined her in a brief prayer, she had no idea the image would become one of the most famous photos of the nationwide revolt.⁣

Sister Ann Rose Nu Tawng said the two policemen kneeling with her in the northern city of Myitkyina expressed remorse for their role in the violent suppression of the protests, which erupted across the country after the military seized power.⁣

The Catholic nun said she believes in the humanity of individuals in the ranks of the military. ⁣

“There might be many good guys among them. I don’t hate them, I also love them,” she told VICE World News. “But they need to think about whether their actions are right or wrong.”⁣

On that terrifying day last week, Sister Ann Rose was working at a local clinic when she heard cries for help. At 10am, people were streaming into the clinic pursued by police. ⁣

She went outside as authorities started violently dispersing protesters, firing live rounds and arresting people. That’s when she knelt down in front of police officers near her, who in turn did the same.⁣

“They apologized to me and said that it was their duty to arrest protesters and that they have to do it. At this point we were just pleading to each other,” the 45-year-old said.⁣

But the intervention did not stop the onslaught. The situation deteriorated, with protesters needing urgent medical attention.⁣

“Our clinic became like a sea of blood because everyone was bleeding. I saw someone collapse in front of me after I heard gunfire," she said. ⁣

“Then I started asking for help. My eyes couldn’t open because of the teargas. I never thought that they would be that cruel."⁣

Though two people were killed, she believes the security forces she pleaded with did not fire on the crowd. “It must have been those police who didn’t meet me who killed them,” she said.⁣