Stealing has been one customary outrage behaviour to which our societies oppose, but seem some of the youth has taken it serious in making it a business for themselves. 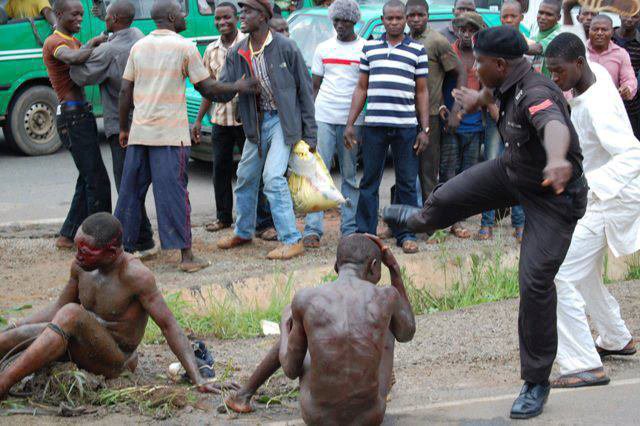 Two Nigerian men has been burnt down without recognition by some mob who saw their actions , in the late hours of yesterday these two robbers reported that their names are yet to be revealed we're seen taking a motorcycle of a young Nigerian guy in Ibadan at gun point to which some of the youth around hesitated and led to their weakness.

According to one of the eyewitnesses, who pleaded anonymity at the scene of the incident, stated that the suspected bike snatchers were three in number, claiming that the third person who had a gun in his possession managed to escape the scene.

It's believed the scene took place for a very long time till the police took charge of the place, as reported one of the suspects flew off at the starting so the left two were taken through severe beatings and burning which he claims has led to the lost of life to one of the victims.

He said , “The thieves were beaten mercilessly before the police officers arrived and took them in their car, on their way to the station one of them lost his life and the other was still alive but this made the police drop both of them in front of LAPO microfinance bank along WAEC junction.