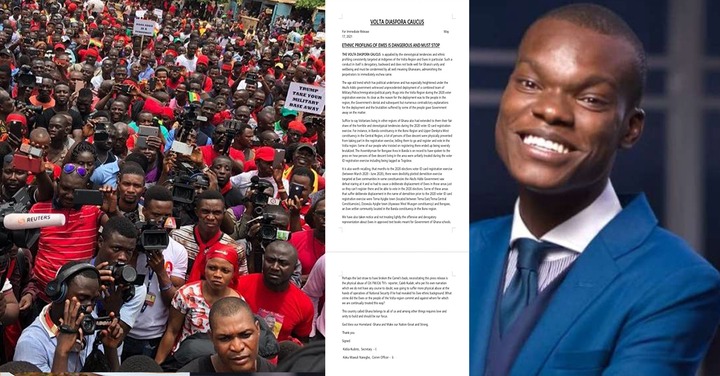 A group known as the Volta Diaspora Caucus has released a statement asking critical questions in what they describe as the ethic profiling of Ewes in Ghana.

The statement was signed by its secretary, Kobla Kudoto. Their release is against the background that a reporter from Citi FM and Television Caleb Kudah in his account had to lie about being an Ewe when he was arrested by the National Security.

The group has listed several happenings in the country that are targeted at Voltarians.

According to the statement, the development is an indictment of the unity the country is enjoying and must be condemned by all.

They recalled that a heavy military deployment was sent to the Volta Region during the election which allegedly led to the brutalities of some Voltarians. The group further added that even though the government provided detailed explanations to defend the deployment, it was not enough.

“Suffice to say Voltarians living in other regions of Ghana also had extended to them their fair share of the horrible and stereotypical tendencies during the 2020 voter ID card registration exercise. For instance, in Banda constituency in the Bono Region and Upper Denkyira West constituency in the Central Region, a lot of persons of Ewe descent were physically prevented from taking part in the registration exercise, telling them to go and register and vote in the Volta region. Some of our people who insisted on registering ended up being severely brutalized”. Part of the statement alleged.

They further indicated that before the election, some areas believed to be dominated by Ewes suffered demolition for no reason.

“Some of these areas that suffered deliberate displacement in the name of demolition before the 2020 voter ID card registration exercise were Tema Ayigbe town (located between Tema East/Tema Central Constituencies), Dzowulu Ayigbe town (Ayawaso West Wuogon constituency) and Bongase, an Ewe settler community located in the Banda constituency in the Bono region”. It added.

The statement further added that Caleb Kuda’s account of denying being an Ewe to escape severe beatings in the hands of the National Security is another clear indication that Voltarians are being targeted unduly.

“Perhaps the last straw to have broken the Camel's back, necessitating this press release is the physical abuse of Citi FM/Citi TV's reporter, Caleb Kudah, who per his narration which we do not have any course to doubt, was going to suffer more physical abuse at the hands of operatives of National Security if he had revealed his Ewe ethnic background. What crime did the Ewes or the people of the Volta region commit and against whom for which we are continually treated this way?” the statement concluded.

Read the Full Statement below 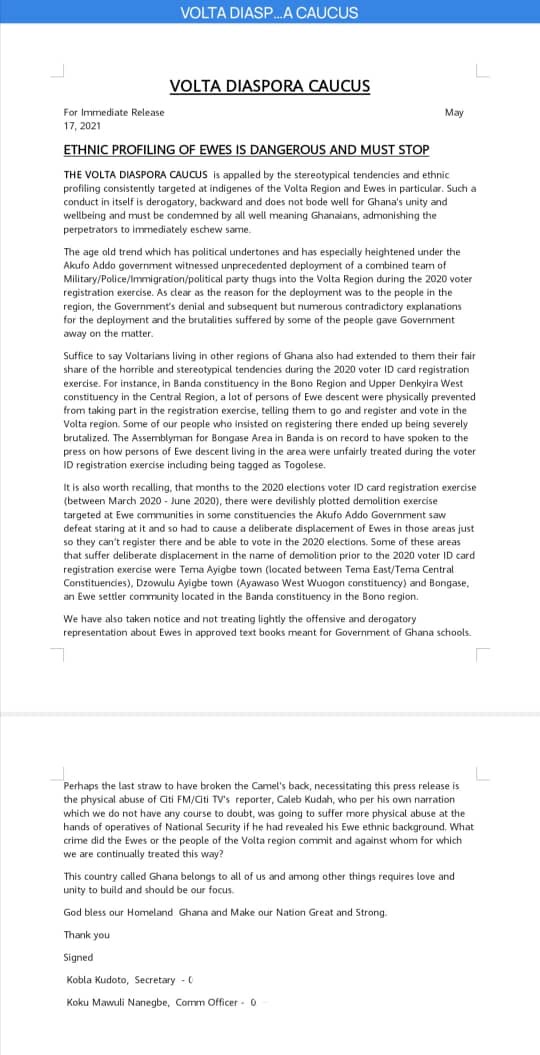