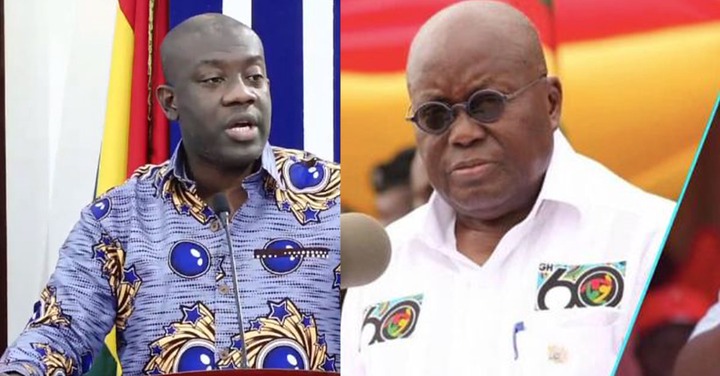 Minister for Information, Mr. Kojo Oppong Nkrumah has brilliantly provided a detailed explanation about what the President really meant when he asked people to go to court.

It would be recalled the President, Nana Addo Dankwa Akufo Addo dared persons who hold contrary views on the raid being carried out by the illegal mining task force in the country to go to court.

But his comment did not go down well with some Ghanaians who believe the president had endorsed the burning of excavators by the task force.

Most of these Ghanaians believe that burning the excavators is not the best and the President should not have dared affected persons to go to court.

But Information Minister, Mr. Kojo Oppong Nkrumah has detailed what the President really meant. In an encounter with the media to provide a briefing on the illegal mining fight in the country so far, the minister indicated that the President did not just dare anybody to go to court without basis.

He says the President made his statement based on illegalities.

“When the President says go to court, it is not as though he is saying that nothing else matters and if you don’t understand it go to court, no. For those who followed the whole speech, there was a background that deals with the question of legality.

He adds that some persons including lawyers have been opposing the statement by the President but if anyone engages in illegalities they have no right to claim damages.

“Prior to now, you’ve heard some persons, sometimes lawyers make the argument that it is illegal to destroy the excavators as found on the water bodies or around the water bodies. The President throughout the speech explains clearly our understanding of the law. If you are involved in illegality, you cannot come back and say you have some accrued right therefore some damages are owed you”. He added.

Mr. Kojo Oppong Nkrumah added that there are no illegalities in the operations being carried out by the task force and so those who hold contrary views are free to seek redress at the law court.

“We are very clear in our minds that there are no illegalities in what the soldiers are doing. And the President proceeds to make the argument that if you disagree with this view, there is a place that you can express those views and a proper determination can be made on that matter. So it’s not like nothing has happened and we are asking people to go to court”. He added.