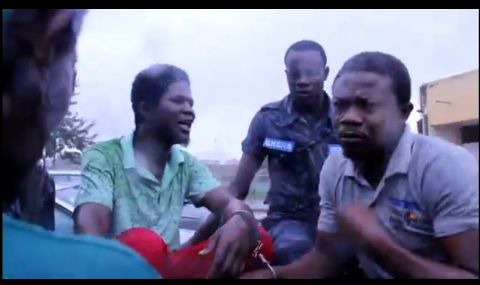 Three people were been sentenced to 20 years in jail for robbery by an Accra Circuit Court.

They will also be sentenced to ten years in prison for conspiring to commit a crime, all of which will run concurrently.

The defendants were sentenced based on their own admissions.

The prosecution, led by Chief Inspector Simon Apiorsornu, informed the court that on March 23, 2021, at 02:30 hours, the accused persons jumped the complainant's fence wall and entered into his room while he was asleep with his wife, equipped with a pistol and a knife.

The plaintiff and his wife were told to lie on the ground at gunpoint by Isaac Ankamah Lartey, who is still at large.

According to the prosecution, the complainant then filed a police report.

A cutter, one green wrist watch, and an army green pullover believed to have been left behind by the robbers were recovered by the crime scene unit and a team of investigators.

According to the prosecution, Akorsah was apprehended at Adabraka on June 1, 2021, while selling the complainant's 250g personalized gold bar.

During interrogation, he admitted to the crime and named the others as his accomplices, according to the report.

According to the prosecution, Akorsah claimed possession of the green wristwatch and army green pullover found at the crime site.

According to the prosecution, on June 2, 2021, police searched Akorsah's and Badu's homes and discovered one ounce of Ants silver coin, three personalised silver chains, and a gold chain that belonged to the complainant.

“Akorsah led the Police to Yaw's hiding at the Dome Railway Crossing,” the statement claimed.

According to the prosecution, on June 2, 2021, police searched Akorsah's and Badu's homes and discovered one ounce of Ants silver coin, three personalised silver chains, and a gold chain that belonged to the complainant.

According to the report, Afeamekor was traced down and apprehended in his hiding in Ho, Volta Region, during the course of the investigation.

They were all charged with the crime and arraigned as a result.

The prosecution claimed that significant efforts were being made to apprehend Isaac.

Content created and supplied by: Chrisano456 (via Opera News )