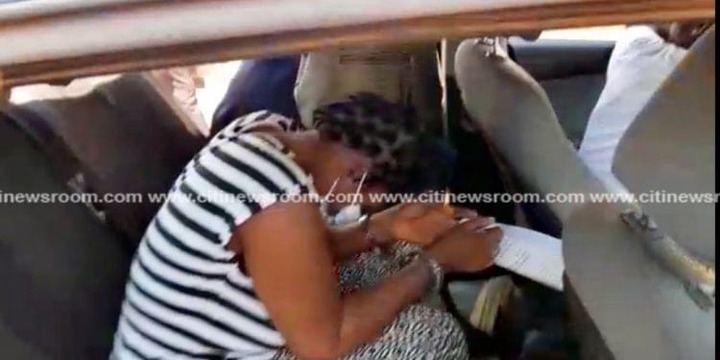 Joana Krah, a 29-year-old woman who was recently arrested in Takoradi, Western Region, for allegedly fabricating her kidnapping, will be sentenced on Tuesday, October 26, 2021.

On Friday, October 22, 2021, she admitted to fabricating her kidnapped in order to collect GH5,000 from a relative.

Ms Joana is accused of misleading a public official and spreading false information.

She was arraigned before the Takoradi Habour Circuit Court A, presided over by His Honour Michael Kwodjoe Ampoadu, on Monday, October 25, 2021.

Although earlier police reports claimed Joana Krah plotted with two other suspects, Susan Awortwe and Francis Eshun, to stage her kidnapping, the other two were never charged.

According to the authorities, Joana Krah planned with the two others to simulate her kidnapping, following which she called her godfather and demanded the money.

Joana went to the Takoradi Central Police Station on Saturday, October 23, to confess after learning that her godfather had reported her to the police and that an enormous search for her had begun.

She stated she was merely joking when she claimed she had been kidnapped with her godfather.

Susan Awortwe and Francis Eshun, two accused, were arrested for their involvement in the crime.

It is understood that the two conspirators have been released on bond.