Gabby Otchere-Darko has revealed to Ghanaians what happened to him and some NPP colleagues of his when they organised a demonstration in 2015. That was when the former President John Dramani Mahama was the President of Ghana. Gabby talked about how they were beaten during that demonstration, some of the protesters were able to run away but he failed to do that, but in a way to save himself he hid behind a tree. Gabby revealed this to Samson Lardy Anyenini on newsfile today.

On a zoom interview, Gabby Otchere-Darko was asked to talk about the current happenings in the country, especially with Ghana going to International Monetary Fund (IMF) and thst of the Arise Ghana Demonstration. 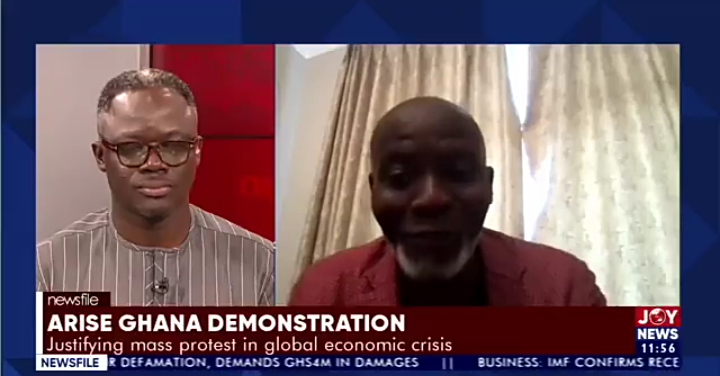 With the Arise Ghana Demonstration, Gabby Otchere-Darko replied that, what happened this week was more of a riot than a protest. He also added that, with the fourth republic this is the only demonstration where protesters were seen burning tyres and throwing stones at the police at the same time.

But Samson Lardy said that, this had happened before and that made Gabby to accept that of course they had also demonstrated in 2015 and with that they got beaten for what happened.

He said that, in 2015 or so they were also beaten in a demonstration they organised. For him he could not run so was hiding behind a tree and that was the best thing he did.