By MouthAfrica (self media writer) | 10 months ago 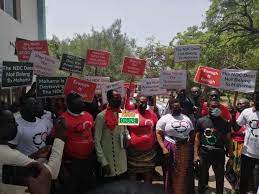 On July 6, 2021 the youth branch of the opposition National Democratic Congress (NDC) set out the routes for its scheduled demonstration.

This follows after the police approved the protest following the first refusal to provide the demonstrators with the security they need.

According to a report submitted by George Opare Addo, the NDC's National Youth Organizer, the convergence will take place at 6:00 a.m. at Accra Mall.

Protesters will march from there to Opeibea House via the Liberation Road, Aviation Road, and the Lands Commission.

They'll next take the Switchback Road to Flagstaff House, then take the Arko Adjei junction to Parliament House.

The youth wing has promised that demonstrators would be safe and that COVID-19 norms will be strictly followed.

However, the authorities gave the goal for protest, named "A March for Justice," after successful negotiations between the two parties.

"The top management appreciates the Ghanaians of all stripes, including CSOs, other political parties and their associated partners, for supporting the street demonstration. This shows that the majority of Ghanaians support marches against the socio-economic problems we have been faced with as a people by this Government."

President Nana Addo Dankwa Akufo-Addo will be sent a petition by the Group at the Jubilee House.

A similar request will be made to the Speaker of Parliament in Parliament's Chamber.

The social justice of the unemployed also needs to be sought in the country.

The first routes were Madina, Accra, Osu and Lapaz Central Business District. They also said that they were going to question the IGP in the police headquarters, but it seems that since the police meeting their plans have changed.

Content created and supplied by: MouthAfrica (via Opera News )