Coalition Against Leadership of the Trades Union Congress (TUC) and Organized Labour has come to the streets in Tamale to protest the four and seven percent wage increases scheduled for 2021 and 2022, respectively. 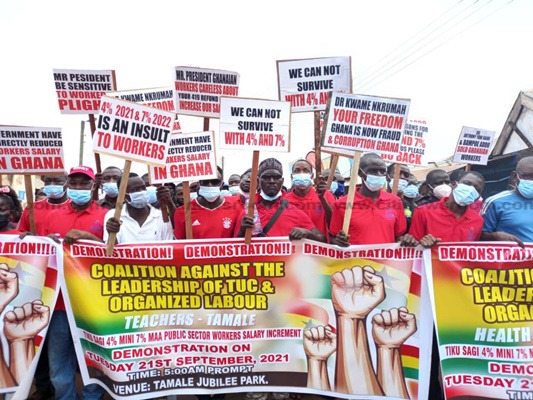 As part of labor negotiations with the government earlier this year, the TUC agreed to the aforementioned base pay increments for public sector workers.

However, after the deal, labor union members expressed their dissatisfaction with the percentage rise, claiming it was insufficient.

In this context, a coalition of public sector workers marched on Tamale's main streets today, Tuesday, September 21, 2021, to show their discontent and seek an increase in public sector salary.

They maintained that, given the current economic situation, the four and seven percent increase is grossly inadequate for their survival. 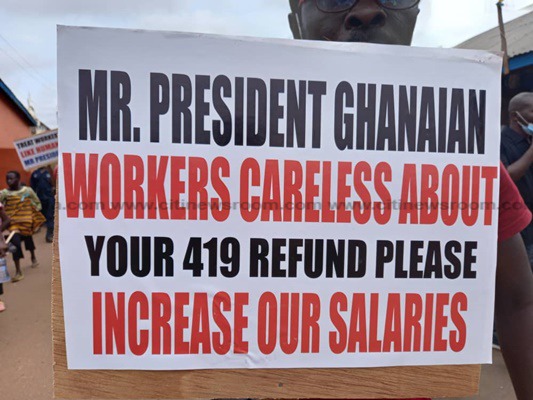 “All we're saying is that we won't be able to make it with a 4% raise this year and a 7% raise next year. Our TUC and CLOGSAG leaders have failed us. They went to the Tripartite Committee on our behalf to negotiate. Workers in the public sector are being treated inhumanely. As workers, we will not sit down and let three people decide our fate.”

This is why we're marching to show the government that they can't be callous to their own employees. We are in debt and suffering, therefore this tiny increase will not suffice. They should raise it, or else the labor unrest will continue until conditions improve for us.”

Some demonstrators also expressed their displeasure with the increase.

The group conducted a similar demonstration in Accra on Wednesday, August 18, 2021, to press their concerns against the base pay hike. 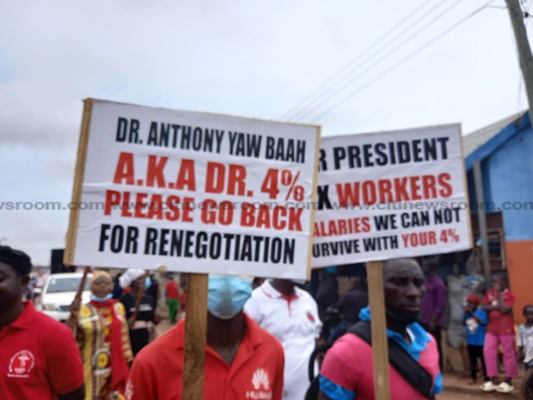 The organization bemoans the fact that the TUC leadership, which is intended to represent Ghanaian workers, has instead become a spokesperson for the government.

Instead, they want to see a 25% boost in public sector salaries.

Coalition Against Leadership of the Trades Union Congress TUC Tamale