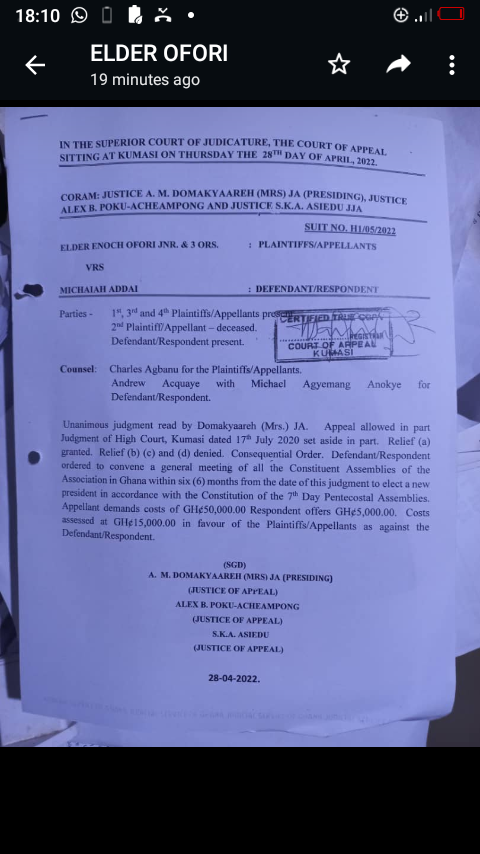 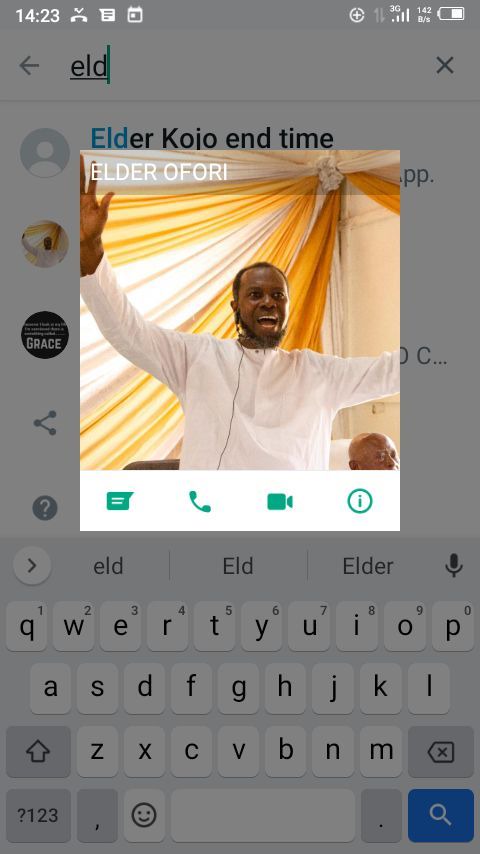 The Court of Appeal in Kumasi in the Ashanti Region presided over by Justice A.M.Domakyaareh (Mrs) together with her two other Coram Justices, Alex B Poku-Acheampong and S K A Asiedu JJA have ordered a Kumasi based pastor Micaiah Addai, to pay a sum of Ghc 15,000.00 been cost against him over a protracted church letigation brought against him by appeallants Elder Enoch Ofori and three others.

Aside the cost, the Court further ordered that pastor Micaiah Addai should convene a general meeting with the entire Constituents of the 7th Day Pentecostal Assemblies in Ghana within six months from the date of judgement (28 - 04 - 2022 to elect a new president to manage the affairs of the church in accordance with the constitution of the church.

At the court where unanimous judgement was read by Justice Domakyaareh (Mrs) JA, the Appeal allowed in part of the earlier judgement of the Kumasi High Court to conclude the case.

Present at the court on the judgement day were the Solicitors of the Appeallants and Defendant/Respondent, Lawyer Charles Agbenu and Lawyer Andrew Acquaye and Michael Agyeman Anokye respectively.

Passing the judgement the court noted that the alleged controversy between the Appeallants and Defendant started in 2007 when the founder and leader of the church (7th Day Pentecostal Assemblies) Elder Enoch Ofori Snr, passed on.

The alleged conduct of Pastor Addai was seen as a violation of the church constitution that stipulated that elections would be held to elect new president after the death of the sitting president.

On the basis of pastor Addai's alleged conflictual attitudes hence Elder Ofori Jnr together with some of the church members dragged him (Addai) to High Court, Kumasi in 2009 to seek justice.

The Appeal Court noted that in it's ruling the High Court passed out judgement in favor of Pastor Micaia Addai under the conditions that Addai should allowed himself for elections with the entire national church branches for to ensure the effective running of the church.

Stressing that after the judgement, pastor Addai refused to comply with the High Court ruling, instead allegedly caused a handful members of the church to induct him into office as the National President of the 7th Day Pentecostal Assemblies, which to the Appeallants blatantly violate the church construction.

That was the subject matter that triggered the Appeal at the Court of Appeal in Kumasi by Elder Enoch Ofori Jnr and the three appeallants against the Respondent pastor Addai.

The court upon it's studies, dismissed the claim made by the Respondent against the Appeallants that they were not church members and that they were worshipping at a different location was not a sufficient proof that a church with a distinct identity has been established by the Appeallants.

The Coram indicated that the establishment of a church is a process that is governed by law, it is ought to be registered by law with the Registrar of Companies after fulfilling all the requiste requirements for a certificate of registration to be issued to it as a company limited under guarantee.

But in pastor Addai (Defendant/Respondent) claim, he was not able to produce any documents or certificate to back his assertion.

The Appeal Court in reference to the defendant's action quoted a case of Khoury and Amor verse Richer on 8th December 1958 which states ; Proof in law is the establishment of facts by paper legal means, where a party makes an averment capable of proof in a positive way, eg, by producing documents, description of things, references to other facts.

It also goes with instances and circumstances and his averment is denied, stressing a person does not prove his case by merely going into a witness box and repeating averment on oath or having repeated on oath by his witnesses.

He proves it by producing evidence of facts and circumstances that the court can be satisfied that what the person avered is true.

According to the Appeal Court what favored the Respondent was the fact that he claimed to have been inducted to hold himself as the National President of the church as the High Court took into consideration.

But Justice Domakyaareh ( Mrs) said in her judgement that " with due difference to the learned trial judge at the High Court, we the Coram think that this conclusion is not supported by evidence on records.

Adding the trial judge of the High Court only relied on a part of the Article III (c) of the constitution of the church to say that since induction took place on November 7 2009,

pastor Addai should head the church.

The Appeal Court further found out that the defendant's various evidence tendered at the High Court against the Appeallants were not accurate based on explainations and interpretations.

Our overall evaluation of this Appeal show clearly that the Appeallants have substantially made a case, and accordingly the judgement of the High Court in Kumasi is hereby set aside in part, the Appeal court pointed out.

Adding that by the way of consequential order as the Consent Judgement evidenced by the terms of settlement, is still binding on the parties.

And therefore the defendant/Respondent (Micaiah Addai) is ordered to convene a general meeting with all the Constituents of the 7th Day Pentecostal Assemblies in Ghana within six (6) months from the date of the judgement (28th April 2022) to elect a new president to run the affairs of the church, the judgement concluded.

Follow What I Say Carefully, put garlic under your pillow every night and expect these results