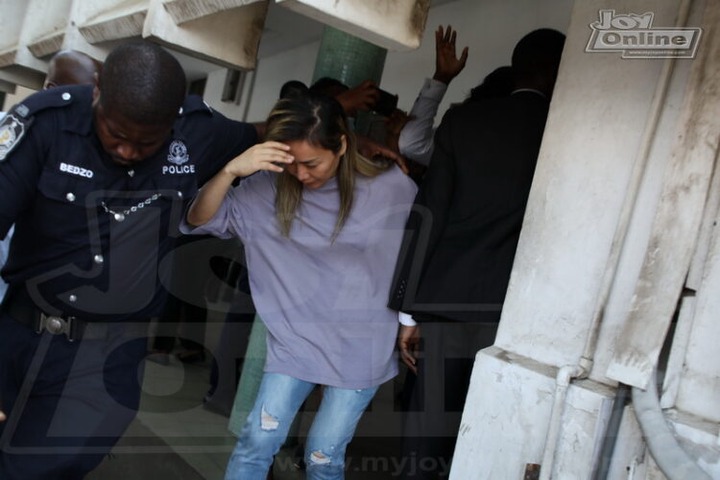 The galamsey kingpin and her compatriots are anticipated to make another appearance in court today, September 27, 2022, following the drama that characterized the first hearing of the case involving Aisha Huang and three other Chinese nationals at the Accra Circuit Court 9.

This comes after her second court appearance on September 14, 2022, where the judge denied bail for her and her three co-defendants on a number of grounds.

On Monday, September 5, 2022, the court remanded Ms. Huang and three other Chinese nationals who are each charged with six counts of engaging in illegal mining.

Following Huang's re-arrest, Attorney General and Minister of Justice Godfred Yeboah Dame had indicated that he would restart a case against her that had been closed in 2018.

On Friday, September 16, 2022, four new accusations were brought before the Criminal Division of the Accra High Court. The virtual trial was held in Justice Lydia Marfo's courtroom.

The offenses include conducting a mining activity without a permit, encouraging others to participate in a mining operation, hiring foreign workers without authorization, and entering Ghana while being barred from doing so again.

On September 14, the lead attorney, Nkrabea-Effah Dartey, urged the court to release his client and her three Chinese co-defendants on bond. The judge declined their request.

The prosecution objected to Aisha Huang's request, according to GhanaWeb's court reporter.

According to the prosecution, new arrests have been made, therefore granting bail to the accused could allow them to interfere with witnesses and investigations.

In addition to asserting public interest in the case, the prosecution said that Aisha Huang poses a flight risk since she has a history of smuggling illegally into and out of the nation.

The accused were remanded into custody and ordered to appear in court on Tuesday, September 27, 2022 after the court agreed with the prosecution's position.

Aisha Huang, the queenpin of Chinese galamsey, sobbed in court on September 14, 2022.

Although it is unknown what caused her to cry, prior reports from GhanaWeb's correspondent suggested that one of her coworkers, the second accused, Johng Li Hua, a Chinese woman herself, became ill during court proceedings and sobbed.

Johng Li was taking some medications, per information from her family, according to her attorney, Frank Kumako.

After collapsing in the courtroom, she was then taken to the hospital.

Nana Agradaa's Husband Not Happy About Her Continuous Arrest?

One Gig Takes Over Agradaa's Church.