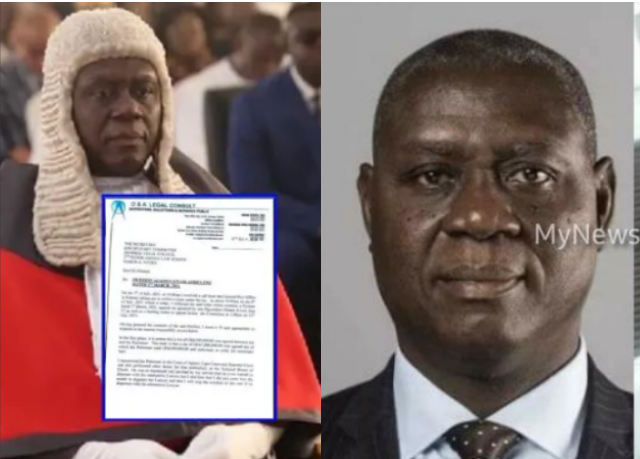 Chief Justice Justice Kwasi Anin Yeboah has taken bold step to clear his name over the allegedly bribery scandal by reporting the allegations against him to the Criminal Investigation Division of Police.

Recently Chief Justice, Anin Yeboah has been in the news for allegedly involvement in bribe on a case at the Supreme court of Ghana.

The Chief Justice has referred allegations of bribery levelled against him by one Lawyer Kwasi Afrifa to the Criminal Investigation Division of the Ghana Police Service.

The genesis of the whole bribery scandal is that, Lawyer Akwesi Afrifa, was petition to the General Legal for misconduct by Ogyeedom Obranu Kwasi Atta VI, a chief reporter.

Lawyer Akwesi Afrifa, stating his side of the story about the petition made by Ogyeedom Obranu Kwasi Atta VI, made mention of the chief Justice, Anin Yeboah being involved in the $5M bribery scandal.

The petition included an amount of money due of which Lawyer Akwesi Afrifa was supposed to refund to Ogyeedom Obranu.

His Lordship Chief Justice, Anin Yeboah has revealed that he has no idea of the bribery,has therefore reported the case to the Criminal Investigation Division of Ghana police to reveal the truth his name to be cleared