I Strongly Disagree With You On This Analysis: Paul Adom Otchere Told Straight In The Face

A fierce disagreement has met an analysis made by the host of Good Evening Ghana Program on Metro Television, Paul Adom Otchere over an analysis he made on the Achimota Rasta High Court Ruling.

In the analysis, Paul Adom Otchere indicated that the judge who presided over the case of the Achimota School and the Rastafarian student failed to apply some sections of the constitution.

Paul Adom Otchere during the editorial on his program this Thursday, June 3, 2021, demonstrated why he believes the judge erred after going through the full final ruling.

“We are demonstrating that this ruling is a wrong decision in the face of the 1992 constitution. We all agree that the boy is in school but the ruling has to be tested in the court of appeal and we believe that the three wise men there will have a different opinion on it”. He indicated.

According to Paul Adom Otchere, in one breath of the constitution, the Judge got it right but refused to apply the exceptions.

“So article 28 of the constitution speaks about children’s rights. It says no child shall be deprived by any other person of medical treatment, education, or any other social or economic benefits by reasons only of religious or other beliefs. And in that, a child means a person below the age of 18 years. So this is in favor of the young man who went to court”. He added.

He further revealed that the judge ignored some exceptions to article 28 of the same constitution which curtails the right of individuals.

“But in article 14, there are restrictions to the right of people in the constitution and we are shocked that she did not make any reference to that. It states that any person shall be entitled to his liberty and no person shall be deprived of his liberty except and in the following cases and procedure accorded by law. One of the exceptions says for the purpose of the education or welfare of a person who has not attained the age of eighteen years. This is straight forward but the judge ignored this exception”. He stated.

But one of his followers who goes by the name Aklas Ganan Aklas has raised a strong disagreement to the analysis by indicating that the cutting of dreadlocks has no impact on the education of the child.

“I disagree with Paul on his analysis. The exception of the law says on the basis of education. And we must define education and prove that cutting or maintaining dreadlocks could affect education. We must look at the spirit of the law and not its explanation”. He noted. 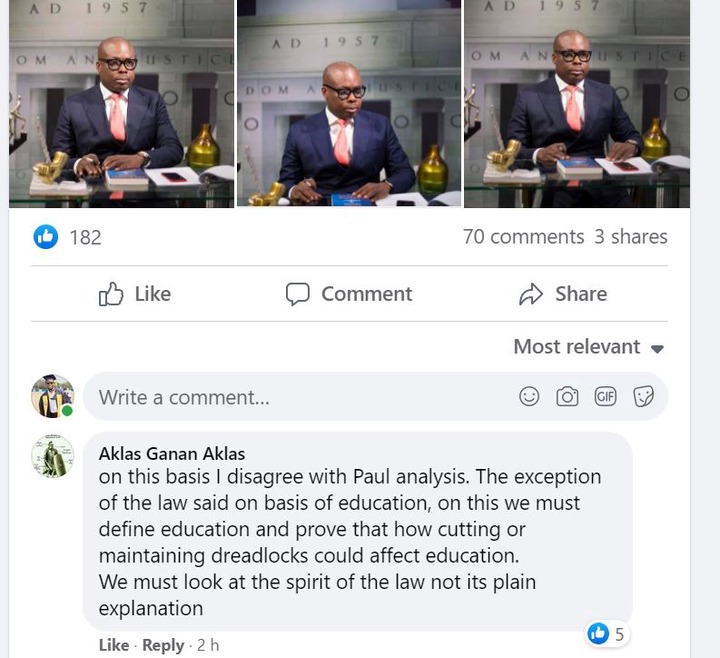 We should blame Dr. Kwame Nkrumah for our failing as a country.- Ex President Kuffour.