By RockyJDJones (self media writer) | 24 days ago

At the heart of Adum; the busy Central Business Centre of Kumasi is heaped refuse and stagnant water situated on the newly constructed Railway Station at Adum PZ. The stagnant water has eroded parts of the railways after unconfirmed people turned the place into a lavatory and bathing house. Speaking on Fox 97.9FM this morning, the deputy relations officer of the Kumasi Metropolitan Assembly in charge of Adum Central Business, assured the public and retailers of the market that, justice will be served to all those involved in that practices. 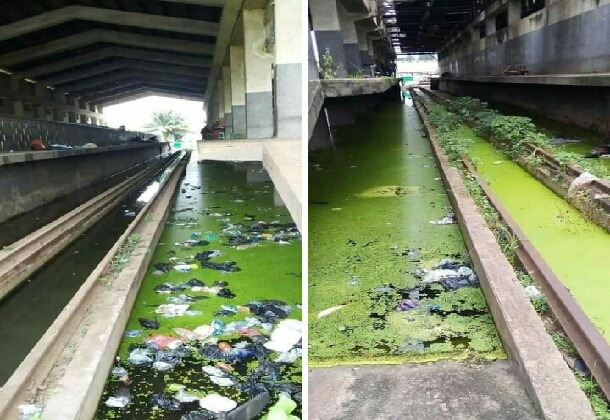 It is a wrongful and demonic approach for someone to turn a beautified place into a bath and defecation place where their unwanted bathwater and faeces land. We have received several videos from some market women and we are working with the police to identify everyone in the video and prosecute them. So far, we have been able to arrest one woman, and three children who are seemed as head porters, Mr Philip Acheampong, the deputy PRO of KMA - Adum Business Centre said.

Defaulters without money to pay will be made to do labourer work to fix the station, the PRO said. Over twenty-seven people according to the PRO had been taped on various cameras defecating and bathing at the railway station and they mostly do it at night. By the works of able civilians, we have over five videotapes that show over twenty-seven people making the railway station their bathhouse and all these are been examined with the police and assistance from some head porters to help identify them, and as soon as we are done with identification, the arrest will proceed, the PRO stated before ending his phone interview with Fox 97.9 FM morning host; Kruodiasempa Serbe Maxwell.

The KMA has also arranged for patrol viability to the railway station and there will be a security post at the station starting next week Tuesday to help in protecting the area from further abuse. This came into light after residents of Kumasi and retailers of the Adum Central Business Markets started complaining of the unwanted smell that came from the Adum PZ railway station.

At first, we thought it was the dustbins placed on the streets, but we later found out it wasn't the dustbins but stagnant water and refuse coming from the station, a caller said after phone lines were opened to the public to comment on the situation. Though the KMA is planning to remove the stagnant water and refuse at the station tomorrow morning, but the unconfirmed damage to the station will cost around eighty thousand cedis to one hundred and fifty thousand cedis, the PRO hinted in his interview this morning.

Honourable Henry Quartey Is Not Joking: Persons To Be Summouned To Court Over Improper Sanitation

Nice Stretching: Nice Ladies Showing How Much They Can Stretch Their Legs.