About three decades after the Fantes had settled in Mankessim, adaptation to the coastal weather, and rapid population growth resulted in occasional outbreaks of diseases.

One of such outbreaks was the one that happened in the era of a hero called Ahor. That particular epidemic was deadly. The epidemic broke out at the time when the tropical torrential rains had started.

It was contagious, deadly, and unstoppable. The epidemic was so dangerous that just mentioning the name of it rocked fear into the heart of many. It thus came to be referred to as 'ambodzin,' meaning a disease that its name was not to mention.

No antidote could curb the destructive spread of the disease. Herbalists exhausted their knowledge in herbal treatment, but no solution was found. Libations were poured to the ancestors, but no answer returned from the ancestral world. Fathers died, mothers died, children died, royals died, and slaves died as well.

Little hope was left, and a solution to the epidemic was needed badly. The only hope left was to consult 'Akyen' a Fante deity. There is no doubt that it was Okomfo Amona, who was by then very old the one who consulted 'Akyen.'

When the result of the spiritual consultation was announced, Mankessim was engulfed with silence. A royal man was needed to be sacrificed for the epidemic to stop.

The situation seemed hopeless because it was obvious that no one was going to give himself up to be sacrificed.

But when all hopes seemed lost, a selfless brave man called Ahor gave himself up to be sacrificed to save his people.

Accordingly, Ahor was led to the altar of Akyen, and his throat was slit, and the royal blood was used for the sacrifice. There and then, lightning flashed, and the sound of thunder was heard, rain showers started to wet the ground, and healing took immediate effect. Those at the point of death regained breathe, and those fleeing from the epidemic returned home.

Ahor had saved his people. Ahor's selfless sacrifice was unusual, and everybody was grateful to Ahor. Something precious was then needed to reward Ahor. But he was dead, and what would a dead man need as a reward? Nothing! The people then decided to commemorate his death every year during the season when the epidemic started till the time he gave himself up to be sacrificed.

The commemoration became the Ahorbaa festival that is celebrated by all Borbor Mfantse.

One of the earliest photos of Mankessim, some seven centuries after Ahor's sacrifice 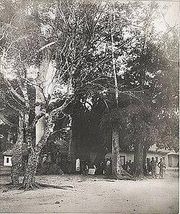 Human sacrifice is something that all humans on earth once practiced. Human blood was usually used to pacify the pagan gods that people worshipped. Until the Jewish followers of Christ spread Christianity in Europe, all Europeans were pagans and thus engaged in ritual killings. The Incas and the Aztecs of the Americas frequently offered human hearts and blood as sacrifices to their gods. Before Christianity came to take roots in Africa, human lives were frequently used in many sacrifices and rituals. All the Akan groups buried their Kings and chiefs with human heads when they died, believing that those buried with him would serve him in the next world