Festival can be defined as an event or occasion which is celebrated by a group a group of people to remember past event. It is mostly celebrated by the same group of people mostly annually. In Ghana, various ethnic groups in celebrates their annual festival either to honour their forefathers, usher in new food or to remember great event which occured to the entire group over some time ago.

Some common festivals that we have in Ghana include Hogbetsotso festival, Kundum festival, Odwira festiva, Ohum Festival and the likes. We have come across one of the famous festivals which is mostly celebrated by the woman in Japan. 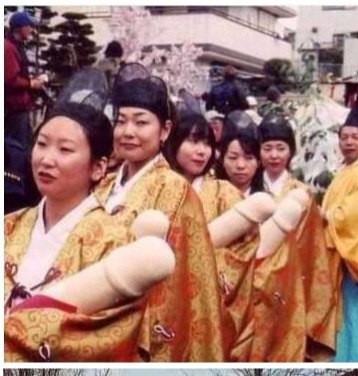 This festival we are talking about in Japan, is call the Kanamara Festival. The Kanamara festival is one of the olders festivals in Japan. It has its roots in the history of Edo Japan. The festival is associated to one of the popular gods in Japan. The Kanayama Shrine was originally dedicated to blacksmiths. Legend has it, however, that the god protector of the shrine (Izanami) was born to the god of fire (Gazukuchi), so it was said that Izanami was born with extensive burns on her lower body. 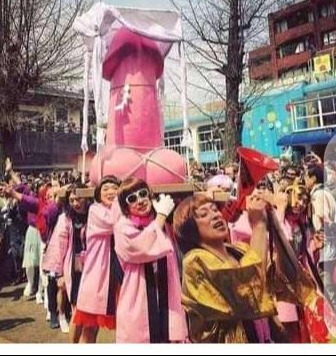 It was known that, Women and men sort help from thier gods at inns (known as meshimori onna) in Edo Japan started praying to Izanami others also ask the shrine, wishing for safe delivery in childbirth, good matrimonial homes, and how business can go on successfully. This kanamara festival is also called the Penis Festival. It was name so because, on the first sunday in the month of April, women will mould penis as part of artworks to show appreciation to their god.

They normally walk along a way named Kawasaki on the first Sunday of April, you will be greeted by more penis-shaped memorabilia that you can handle, and a swarm of cameras pointing all in one direction.

There are three shapes that we can talk about : a black steel one, a wooden one, and an outrageously pink one—donated by Elisabeth Kaikan, an organization formed in 1979 to promote the rights of the LGBT. Be prepared for penis-shaped hats, T-shirts, lollipops, shrine amulets (omamori), and even Japanese radish (daikon) carved in penis-shape and auctioned off to the highest bidder.