The duties of the young boy or girl who is seated in front of a king or in a palanquin.

By Royalvibes (self meida writer) | 17 days

OHEN OKRA(AWOSO): The Soul Of A King Or Chief!

Ohen Okra is a virgin young boy or girl who's always seated in front of a king or chief in-state or in a palanquin. Per Akan custom, the boy/girl must be a virgin to wear that sacred ‘NTAKRAKY3’ feathers hat. These sacred feathers hat is prepared by a spiritualist.

It is a ceremonial hat as well as a charm for the protection of the King at durbars or funerals. It is made up of eagle’s feathers, red cloth, two horns, and spiritual seals embossed on plates of ‘S3S3GUA’ 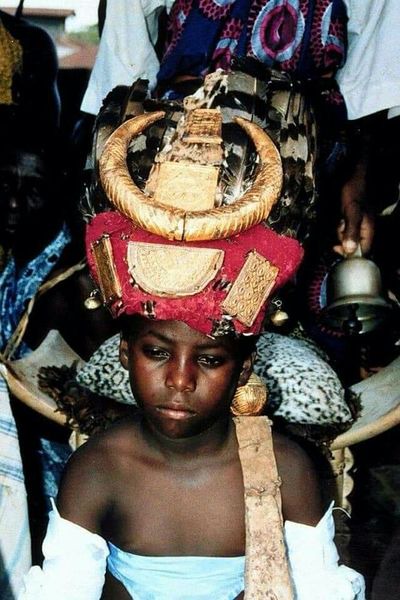 This charm is believed to neutralize any spell casts against the king when he sits in the state or ridding in the palanquin. The Okra normally carries any other sacred things of the King like ‘BODUA’- fly whisk, ‘AKOFENA’-sword, ‘POMA’- staff and TUTIA, etc. along with him and is the only one who enjoys riding in a palanquin with the king. 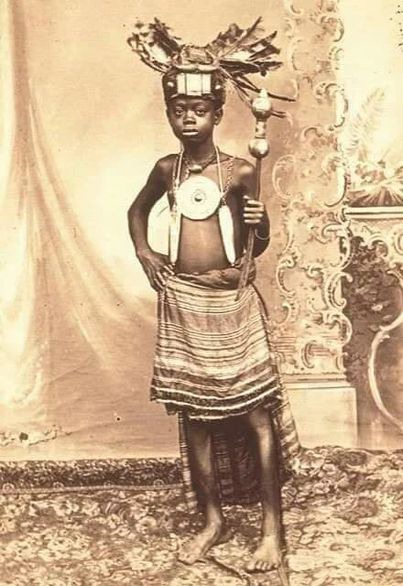 When he or she wants to dance to the public in a palanquin, he stands up and bows a bit to seek permission from his lord to dance, and when he or she is done, does the same; bow to the lord and sits.

In the olden days, when the lord is served meals, he/she is the one who eats some of the meals for some time before the king himself eats. He/she does this in case the food is poisoned he will die first and prompt the king about a portion of poisoned food. This saves the king’s life. He enjoys pampering best meals and royal security until he/she breaks his/her virginity. He/she is no longer fit to be the king’s soul after the virginity break.

Since Ohen Okra enjoys all the privileges given in the palace, in the olden days, when the king goes home to ‘BANMU’ or village to rest with his ancestors, he/she is made to escort him.

Is the Ghanaian Culture Barbaric? Below are some individuals' views.

Meso Ranking, I hope we all see how barbaric our culture we cherish so much used to be. An old man who is a king dies and a young boy or girl must be sacrificed with the belief that he will escort the king in his spiritual journey. Thank God we have seen the light now.

Meso Ranking, De Avator I can imagine how many times your teachers caned you for deviating in school. In the same way, I will condemn Christianity for making sacrifices, I will also condemn Dirty African culture, that makes sacrifices. If you have, the fact put it down and I will condemn it without even relating it to Africans making such barbaric sacrifices. It is infantile and childish to say that because others made sacrifices, it is okay to also make such sacrifices. Moreover, there is no fact or data which shows that Christians were killing children because they, believed that these innocent children will escort dead chiefs. That is what we are talking about, don’t deviate from the topic, killing innocent children, with the belief that these children carry the soul of an old king is what we are talking about, and show me which Christian group engaged in such a practice. Don’t deviate from the killing of innocent children with the belief that they will escort an old king. That’s barbaric.

Obibinii Ptah Lencer, Lol Meso Ranking u have a point but u don’t have all the points lol the “knights of Templar “ did a lot of killing they were a Christian body ..but when u come to Africa we have our own way which has been original with us ever since the Annunaki genetically modified us bruh those kind of things are normal with every great kingdom. The United Kingdom has a barbaric side too but they have done a show or tell fine, we Africans love ours cos it’s part of a connection between realms for us u can choose to understand or overstand it’s still happening now and there’s nothing we can both do about it cos it’s an ORIGINAL Way of life of a group of nations (people)Akan...

Meso Ranking, Obibinii Ptah Lencer I understand your point perfectly, I know there were killings and other barbaric kinds of stuff done by all kingdoms, most especially during times of war, definitely, they will kill opponents, that is a definite thing done by all, even the Ashanti people also killed to expand territory. But, my main concern is with the ritualistic killing of a young boy who is believed to be the soul of the king. They will kill a young boy or girl because, of an overaged old man’s death, that is what I have a problem with. No one is saying, kingdoms all across the world didn’t kill, all kingdoms including African kingdoms killed and massacred people, that is not the preserve of only Europeans, African kingdoms also did the same, but the particular killing of your own citizens, who is a child and knows nothing just because an old man dies is what I have a problem with. Show me which European kingdom practiced this act?

Destiny Opoku Mensah, Meso Ranking there's nothing barbaric here, the same way President bodyguard die for him in line of duty, why not call that as barbaric, I always say our culture and traditions are the Best, so call Christianity and civilization is what we are all enjoying today our water destroyed, the forest is destroying, farming on river Banks, youths don't respect anymore, stealing from the public purses is all because of abounding our rich cultural heritage and values. Please go and do your research, do you know millions of people were killed to establish the British Empire, France kill millions of people to establish the France empire, France kill millions of Africans in Congo and other countries before ruling them, white American kill millions of indigenous people in America to take over their land, British kill millions of indigenous Australians before taking over their lands.

Meso Ranking, Destiny Opoku Mensah Massa Massa stops deviating from the topic being talked about. African kingdoms like the Ashanti kingdom also massacred other Africans so that they can expand, The denkyira people also did a lot of killings of people, no kingdom whether African or non-African expanded without killing people. What we are talking about here is the killing of a young boy or girl who is part of your own kingdom just because an old king has died, that is what I am talking about, for killing to expand kingdoms both Europeans, Asians, and Africans all have done same, we shouldn’t create the impression that only Europeans killed people to expand their kingdom. Africans also killed people to expand their kingdoms. Show me which European country or kingdom killed a young boy or girl because an old king died? That is what we are talking about, it’s a stupid tradition, thank God it’s not being practiced again. We shouldn’t be shy of condemning the barbaric aspects of our culture, we shouldn’t think it is an attack on culture simply because someone is criticizing the bad aspects of our culture.

Let’s admit some of our cultures is very stupid and must be condemned dasooor . It’s funny how people are getting emotional and deviating from the fact that the killing of a young boy or girl because an old king dies because it’s our tradition is evil and barbaric. In all the European killing and bla bla that you talked about, didn’t you see it involved the killing of opponents? And for your information, the same barbaric acts by Europeans were also done by some African kingdoms. Do you think the Ashanti kingdom expanded because they went around to preach peace or they went around talking to people to form the Ashanti kingdom? They also killed other Africans to expand, killing with the view of expansion is a barbaric act seen across the board and it was done by all including Africans. But killing a virgin young boy or girl because a king is dead is what I am talking about.