Meet The Acclaimed Most Wicked President In Africa

The President who is considered as the most wicked in Africa is the 3rd president of Uganda, Idi Amin. He was once a military officer but he overthrew the then President, Milton Obote and ruled Uganda from1971 to 1979. 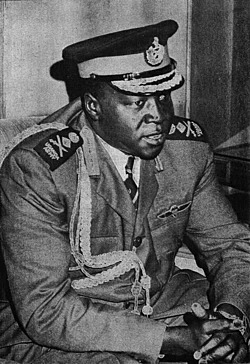 His rule was autocratic and brutal. Due to his brutal and proud nature, he was nicknamed "The Machete". During his reign he persecuted certain ethnic groups and supported terrorist hijackers, and this led to intense poverty in Uganda.

Uganda as well experienced numerous killings, economic hardships and human right abuses during his reign as President in the country. He bestowed on himself the strangest titles ever; His Excellency, President for Life Field Marshall Al Hadj Doctor Idi Amin Dada, VC, DSO, MC. Lord of all the Beasts of the Earth and Fishes of the Sea and Conqueror of the British Empire in Africa in General and Uganda in Particular.

It was reported during those times that he actually killed those he deemed as enemies and kept their heads in a freezer. It was even rumoured that he ate human meat and engaged in blood rituals.